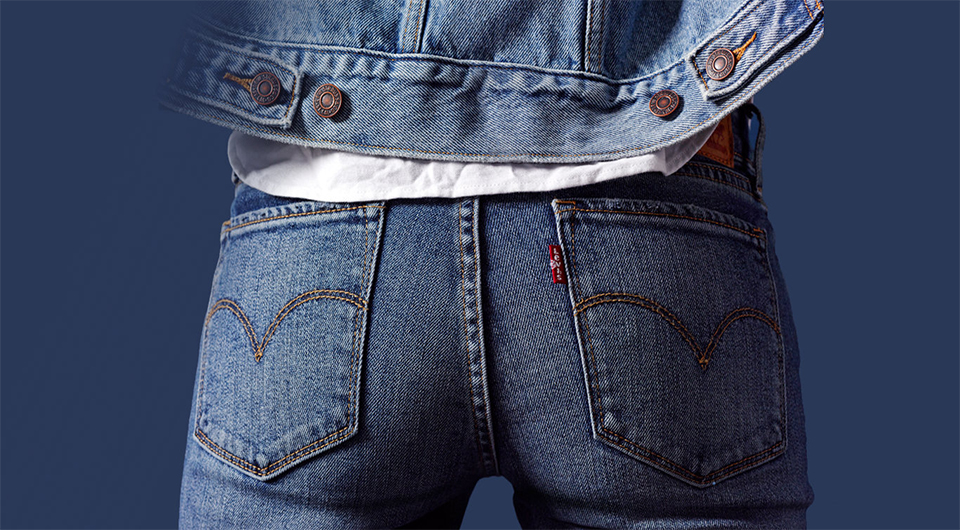 On May 20, 1873 Levi Strauss and Jacob Davis were awarded a patent for a new garment: riveted work pants. Using denim, the partners began manufacturing the world’s first blue jeans—the “blueprint” for all jeans today. Originally called waist overalls, this humble denim invention, renamed Lot 501® in 1890, revolutionized fashion.
The 501® jean began as a work pant but became synonymous with Western cowboy attire by the 1930s and 1940s. Soldiers wore the jeans with T-shirts during World War II. Later, actor Marlon Brando wore a pair of 501® blue jeans in movies like The Wild One—popularizing them as the quintessential uniform of the rebel. In the 1960s, teens embraced the 501® and soaring sales in America and abroad in the succeeding decades stimulated a global denim sensation. The cultural impact of the 501® jean was so significant that in 1964 a pair entered the Permanent Collections of the Smithsonian Institution in Washington, D.C.
To celebrate the birthday of blue jeans, here’s a look back at some significant moments of the pants’ past.
1873    The birthday of the blue jean.
Levi Strauss and Nevada tailor Jacob Davis partnered in 1873 on a patent to make the first riveted pockets on pants for working western pioneers by using copper rivets at the points of strain. This became the first iteration of the 501® jean, then called XX. On May 20, 1873, the original patent for using rivets on men’s pants was granted, and an America icon was born.

1890    Lot numbers were first used to differentiate the various products made by the Levi’s® brand. The 501® jean, as it is now called, was officially named when the number was assigned to the now world famous “copper riveted waist overalls.”
1922    Belt loops were introduced on Levi’s® jeans for the first time, in response to consumer demands and changes in men’s fashion.

1943    The famous Arcuate Stitching Design, which has graced the back pockets on the 501® jean since its debut, was registered as a trademark in 1943. It is iconic in its own right, as one of the oldest clothing trademarks still in use today.

1950s  The Rebels of the 1950s proudly wore the 501® jean – adopted from the laborers after the Great Depression – and made it a symbol of irreverence and solidarity. Worn by everyone from James Dean and Marlon Brando to Jack Kerouac and Jackson Pollock, the 501® jean became the emblem of youth and a symbol of rebellion.
Emerging in Hollywood, style icons begin to embrace 501® jeans after Marilyn Monroe is seen wearing them in the hit film “River of No Return.”
1964    So significant is the cultural impact of the 501® jean that in 1964 a pair entered the Permanent Collections of the Smithsonian Institution in Washington, D.C.
1960s & 70s   Millions of pairs of 501® jeans continue to be worn by the young pioneers who are writing history, their ubiquitous presence is seen throughout the peace movement of the 1960s and 1970s.

1980s  Steve Jobs adopts his signature look of a black turtleneck, Levi’s® 501® jeans and gray New Balance sneakers.
1989    Pioneers continue to wear the 501® jean during the fall of the Berlin Wall in 1989.
1990s  Worn throughout the Grunge Movement, the 501® jean continues to remain at the forefront of change across generations, becoming a staple in Kurt Cobain’s wardrobe and those of other legendary rock stars.
2000    Time Magazine names the 501® jean the “fashion item of the 20th century,” beating out the miniskirt and the little black dress.
2009    President Barack Obama wears Levi’s® 501® jeans to throw out the first   pitch at the 2009 All Star Baseball Game
2015    The Levi’s® Brand introduced the new 501® CT (Customized & Tapered) jean. We took the Original and added a custom taper, crafting the perfect fit for a modern take on the classic 501® jean.
Now    Levi’s® jeans are still the first choice of modern pioneers: the artists, musicians, fashion icons, athletes, entrepreneurs, activists, and even presidents who all consider the 501® jean their original.
ABOUT THE AUTHOR