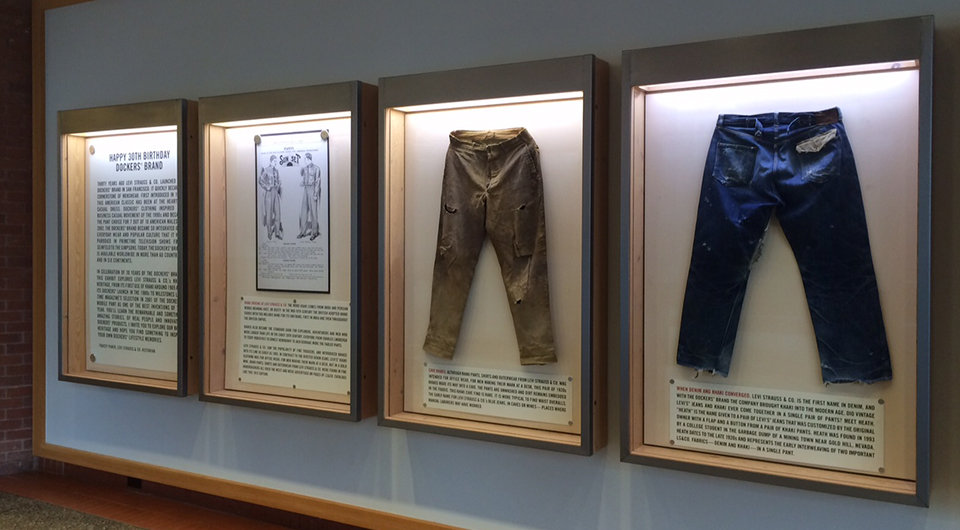 The Origin of Khakis

We’re celebrating the 30th Anniversary of Dockers® all year long, and that includes our office HQ getting in the spirit as well. Currently on display at our San Francisco office, LS&Co. Historian Tracey Panek has curated a collection of heritage khaki and Dockers® items from the LS&Co. Archives, which will be up through the summer.
Since we know that everyone won’t be able to come check it out in person, we’re bringing it to Unzipped, starting with the first piece below. Where better to start than with the origin of khakis and the meaning of the word itself? Enjoy this khaki trivia, and then go forth and adventure on like the khaki-wearing explorers of the early 20th century!

The word “khaki” comes from Urdu and Persian words meaning “dust,” or “dusty.” In the mid-19th century the British adopted khaki fabric with this melodic name for its uniforms, first in India and then throughout the British Empire.
Khakis also became the standard garb for explorers, adventurers and men who were larger than life in the early 20th century. Everyone from Charles Lindbergh to Teddy Roosevelt to Ernest Hemingway to Jack Kerouac wore the fabled pants.

Levi Strauss & Co. saw the popularity of fine trousers, and introduced khakis into its line as early as 1905. In contrast to the riveted denim jeans, Levi’s® khaki clothing was for office wear, for men making their mark at a desk, not in a gold mine. Khaki pants, shirts and outerwear from Levi Strauss & Co. were found in fine haberdashers all over the West and were advertised on pages of LS&Co. catalogs like the 1912 edition above.
Stay tuned for more from our Khaki exhibit in the coming weeks! You can also check out more facts about khakis here.