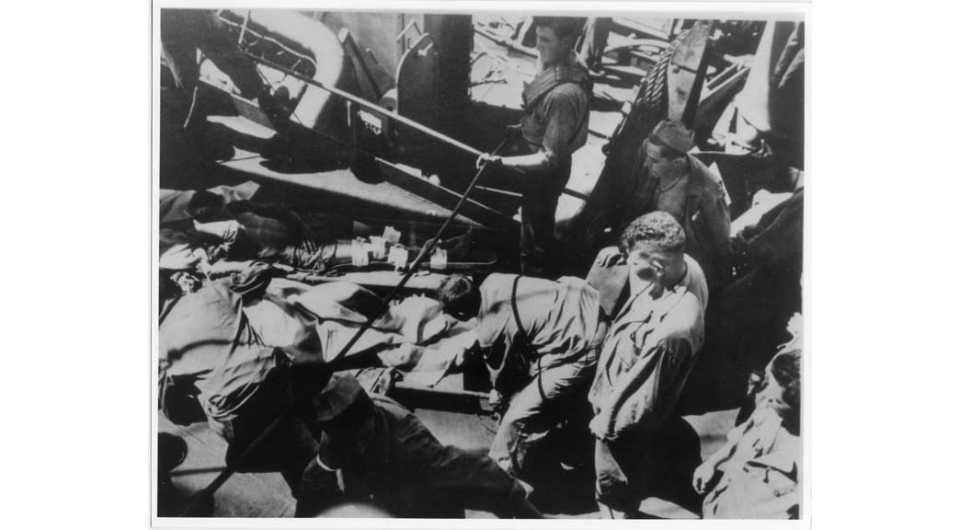 During World War II a mother spotted her son, a soldier serving in Saipan, in a photo she saw in a window display. The mother recognized her boy — despite his military haircut — by the turned up cuffs on his Levi’s® jeans, the way “he always wore them at home.”

Our 501® jeans changed during the war to conform to rules set by the War Production Board for the conservation of raw materials. The crotch rivet, watch pocket rivets and back cinch were removed to save fabric and metal. The Arcuate stitching design was removed as the thread was decorative only. In order to keep the design on the pants, LS&CO. sewing machine operators painted an Arcuate on each pair.

An incident occurred to me the other day, which might well be captioned ‘LEVI’S GO TO SAIPAN’. While walking down Battery St., the other night after leaving my office, I stopped at one of the windows in the Shell Oil Bldg., which had a display of pictures taken by the U.S. Marine Corps., of the Marines at Saipan.

While looking them over, to my amusement I saw my son in one of them. It was not a full face picture, but I still could recognize him very easily. Of course he had a GI haircut, but it was still as curly, he still wore his shirt in the sloppy high school manner with all of it out, and the most convincing part of it all, tho [sic], was the fact that he had on Levi’s with the cuff turned way up, as he always wore them while home. I looked at the other boys in the picture, and they all had on regular dungarees, and the ones the boy was wearing were undoubtedly Levi’s!

As soon as he left here and was sent to Hawaii for further training, my son wrote and asked us to send him three pairs of Levi’s. Needless to say, we practically scoured the entire of San Francisco before we were able to get them for him. We ailed them to him and he thanked us profusely for them, and also said in the same letter that he was the envy of all the other boys in his detachment, and used to sleep with all three pair under him at night! We asked him why he preferred Levi’s to the dungarees issued and he said that he preferred the tight fit of them, and they were much more comfortable to swim in, just in case they had to abandon ship! He had practiced that, he said, both with Levi’s and regulation dungarees.

I thought this small incident would prove interesting to you, showing how much our boys reared in the West and wearing western Levis depend on them, thru school, thru play and thru war.