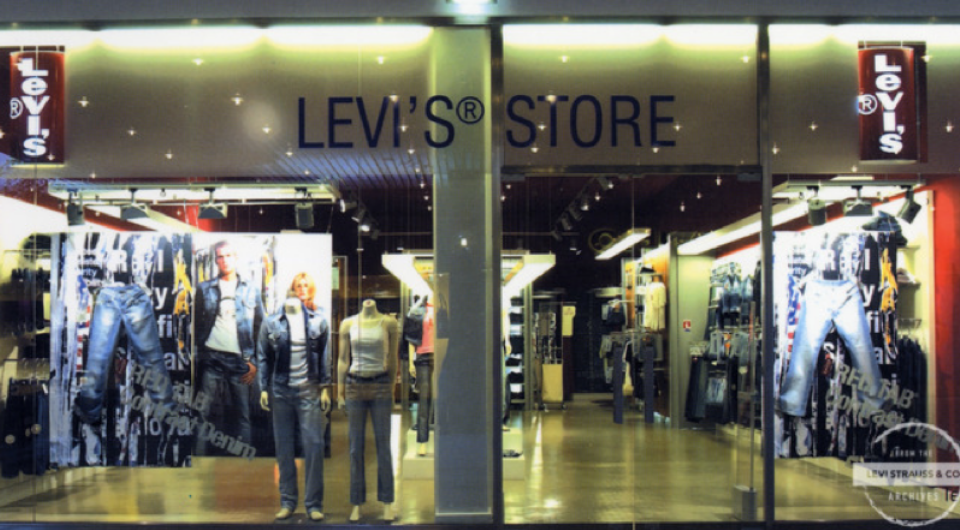 The Evolution of LS&Co. Retail: 1980s to Present

This year, Levi Strauss & Co. celebrates the 35th anniversary of the first Original Levi’s® Store—a retail shop that opened in Vitoria, Spain in 1983. To mark this milestone, Tracey is exploring the evolution of LS&Co. retail.

After 130 years of being a wholesale business exclusively, Levi Strauss & Co. opened its first retail store in Spain in 1983. The new shop, a single-brand store offering all Levi’s® products from tops and jackets to jeanswear, kicked off a new phase in LS&Co.’s retail history.

Along with its own shops, LS&Co. continued its wholesale business introducing products for sale at national chains, like J. C. Penney and Sears, Roebuck and Company. It also continued selling at department stores and specialty shops, expanding some retail relationships that had begun years earlier. California-born Miller’s Outpost (now Anchor Blue), for example, sold Levi’s® 501® jeans in the 1970s and grew to more than 300 locations throughout the West by the end of the 1980s.

By 1991, LS&Co. opened its first retail store in the United States. Starting with a location in Columbus, Ohio, the company opened dozens of Original Levi’s® Stores and Levi’s® Outlets during the decade. LS&Co. selected prime locations like shopping malls or popular commercial districts for new stores. By the end of the decade in 1999, the company opened a Levi’s® store in San Francisco’s Union Square. The location itself was historic, just across Stockton Street from where Levi Strauss lived from 1863 to 1864.

On July 4, 1995, the company opened the first museum-concept Original Levi’s® Store in Asia.

Outside of brick-and-mortar stores, LS&Co. consumers in the 2000s and beyond shopped for products in mail order catalogs and through a growing new trend—on the internet.

Today, Levi Strauss & Co. is a global omni-channel retailer, selling products in 110 countries across the globe. Consumers can purchase LS&Co. items online or in approximately 50,000 retail locations worldwide, including approximately 2,900 retail stores, both franchised and company-operated, and shop-in-shops dedicated to our brands.

From tiny mom-and-pop shops to western wear supply and department stores where it functioned as a wholesaler, LS&Co. has grown into a world-class retailer.

Read Part One and Part Two of Tracey’s series now. And keep up with the LS&Co. Archives and other cool LS&Co. heritage news by following Tracey on Twitter, @TraceyPanek, and stay tuned to Unzipped!