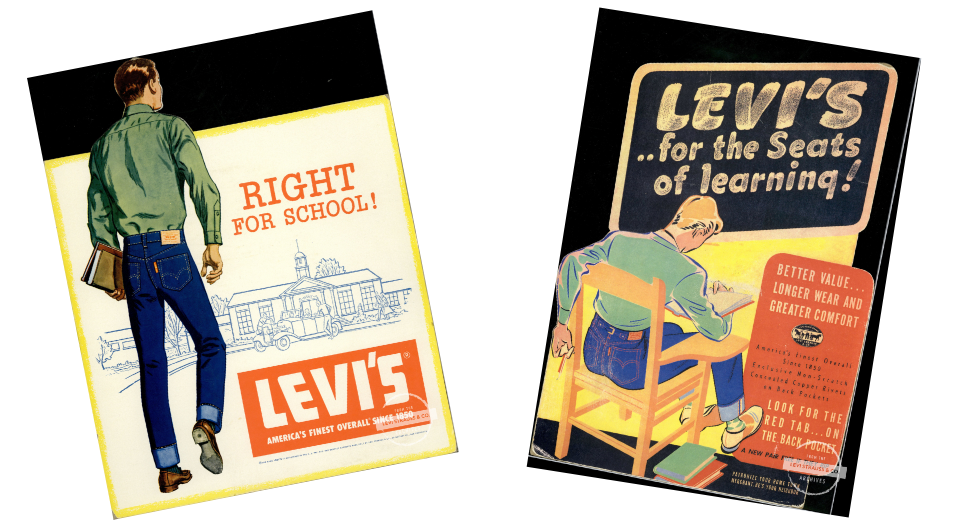 School is in full swing and classrooms across the country are filled with students dressed in denim. While blue jeans may be a common sight in school today, before World War II they were generally worn only by students who lived out West.

By 1949, Levi Strauss & Co. expanded its sales beyond the Western states, selling Levi’s® jeans in places like Connecticut, New York and other eastern states.

By the 1950s they were notorious. Why? Because we advertised our jeans as “Right for School” at a time when Hollywood costume designers put bad boys in denim. Enter Marlon Brando in the 1953 classic movie, The Wild One. Dressed in Levi’s® 501® jeans and a leather jacket, Brando played bad boy Johnny, who headed up a motorcycle gang that terrorized communities. Denim had become dangerous.

Despite company ads assuring East Coast customers that Levi’s® jeans were suitable for serious students, some vehemently disagreed. “I could not help being shocked with your ‘ad’ in The Sunday News of August 25,” wrote a woman in Hillsdale, New Jersey in a letter to the company dated August 29, 1957. She continued:

I refer to the picture showing a young boy dressed in shirt sleeves, sloppily opened at the collar and wearing dungarees with the caption – “RIGHT FOR SCHOOL.”

While I have to admit that this may be “right for school” in San Francisco, in the west, or in some rural areas, I can assure you that it is in bad taste and “not right for School” in the East and particularly New York…

… Assuming that only ignorance is responsible for such a lack of good taste and that no insult was intended by your firm, we hope your misrepresentation of “right for school” will be corrected to more suited occupations.

Propriety and respect are good discipline rules. Let’s not desecrate our schools nor promote juvenile delinquency.

Echoing the dismay voiced in the 1949 letter, many schools banned blue jeans. Some students fought back. To get around the prohibition, these students bleached the blue color right out of their jeans in order to wear their beloved pants to class.

The company continued its “Right for School” campaign with ads like “Levi’s for the Seats of Learning.” LS&Co. leaders even launched a letter-writing campaign to school administrators to convince them that blue jeans qualified as proper student attire.

Denim eventually won out. LS&Co. introduced White Levi’s® in the early 1960s (along with a number of alternative colors) to take the bleaching work out of denim dressing. In 1967, the company also offered the 505®, a new pre-shrunk zippered version of our famous riveted blue overalls, calling them “jeans” for the first time.

Denim was soon right for school all over the United States, and eventually became the uniform for societal rebellion in all its forms. Denim inciting trouble? Perhaps. But still everyone’s favorite fabric—especially students.