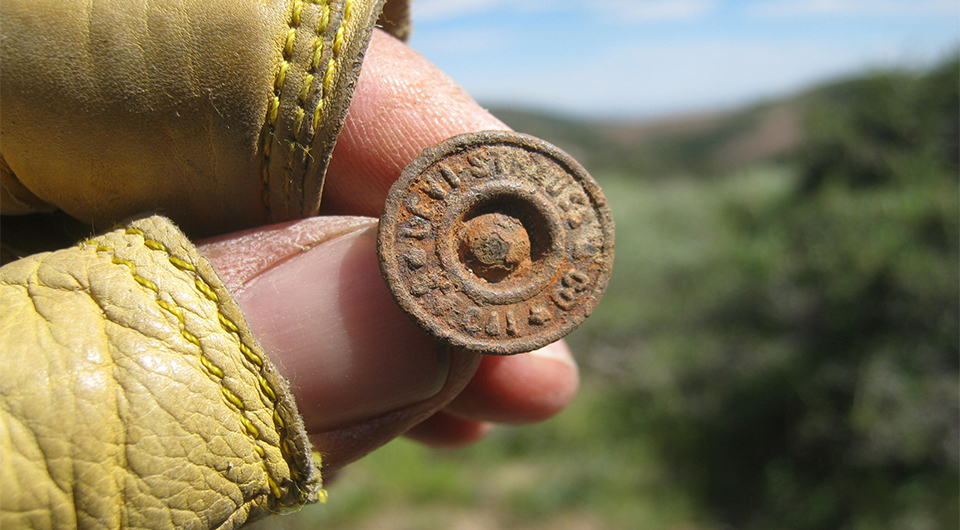 Throwback Thursday: The Case of the Missing Button

For early Levi’s® garments, the tiniest details offer clues to their origins. Metal sundries like buttons and buckles, for example, can provide the key to understanding more about a garment, the person who wore it or the era when the garment was made. A rusty Levi Strauss & Co. button, for instance, might prove an essential element of documentation. Case in point — an unusual archaeological find.
I recently received a letter and photo from a team of archaeologists exploring a mining area in the Rocky Mountain region. “My team recently discovered this rivet button during a survey [and we’ve] been trying to pin down a solidly documented date for it,” they wrote. The team believed their findings reached back to the turn of the century. To test their hypothesis, I pulled out two garments for a bit of button browsing: Calico, a pair of 1890 overalls, and XX, our oldest Levi’s® overalls, which date to around 1879.
Levi’s® earliest waist overalls were made with several metal attachments: Rivets, first used in 1873, held the pockets onto the garment. Rivets were also applied at the base of the button fly and to attach the back cinch. Buttons held the fly together and, up until the 1930s, were also on the waistband to be used with suspenders. Some of the earliest buttons were sewn on with waxed linen thread, but later Levi’s® garments featured shank-style buttons like the one recovered.
In comparing their button photo with the button on an 1890 pant, it looks like it could be a match, from the style of the button to the lettering.

The recovered button was found among a dense scattering of artifacts — from tin cans and broken bottles to partially buried equipment and structural debris — some of which had details that also appeared to date from the 1890s. “Because of the richness of the associated artifact assemblage at this site,” the archaeological team reported, “it is one … that provides a clear window of insight into the lifestyle of the employees working the mines in the district.”
The metal details of our Levi’s® pants are evidence of a time past, a place past and especially a people past — those who labored to build the American West.
ABOUT THE AUTHOR