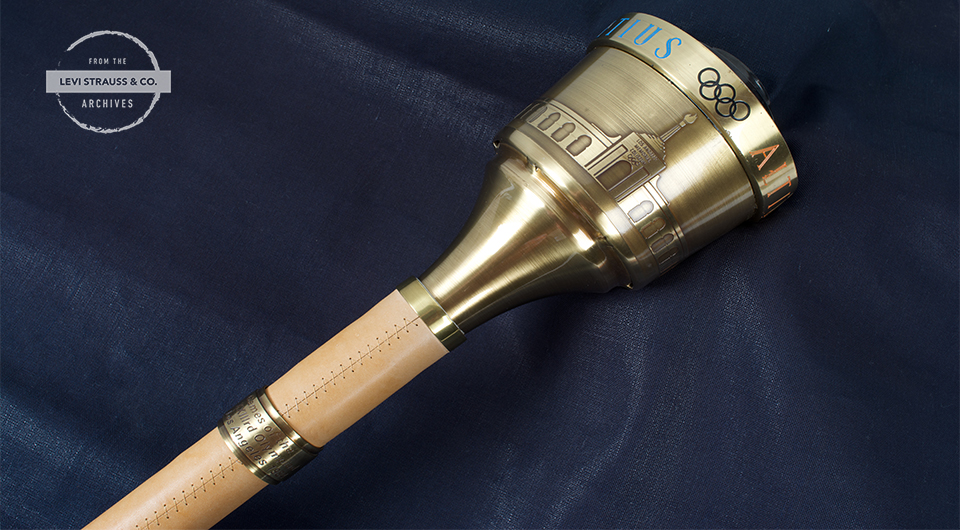 It’s a new Olympic season, and we’re not only feeling patriotic, we’re feeling nostalgic. So, as athletes face off in Rio, we’re taking a look back at Levi Strauss & Co.’s storied partnership with Team USA.
The Levi’s® brand was first tethered to the fabric of American athleticism in 1979, when LS&Co. served as the official outfitter at the Pan American Games.
The very next year, LS&Co. clothed the American team at the Winter Games in New York and planned to do so for the Summer Games in Moscow. Due to a political conflict with Russia, however, President Carter decided that America wouldn’t participate.
Nevertheless, LS&Co. delivered the Olympic parade uniforms and warmup suits to the American athletes and, in partnership with President Carter, sponsored a five-day celebration in Washington, D.C. The festivities included a Congressional award ceremony for Team USA, where athletes received their Congressional medals while fully decked out in Levi’s® gear.

Lot 501 made for gold medal winners of 1984 Olympics belonged to Brad Alan Lewis.

LS&Co.’s steadfast partnership with the U.S. Olympic team was particularly meaningful that summer, as other sponsors had discontinued their support when America withdrew.
“Some of our benefactors did not stay with us as they might have, had we gone to Moscow,” said Robert Kane, then-president of the U.S. Olympic Committee. “Not only did Levi Strauss & Co. stay with us, but they did much more than they were expected to do.”
That commitment continued in 1984, when LS&Co. returned as the official outfitter for Team USA, providing uniforms for 800 U.S. athletes and 60,000 employees during the Summer Games alone. We also outfitted participants in the 11,000-mile cross-country Olympic dash, during which runners carried the Olympic torch to the Los Angeles Coliseum. LS&Co. sponsored a portion of the torch run — a six-mile stretch that passed by Levi’s Plaza in San Francisco. LS&Co. employees ran this stretch of the relay while outfitted in Olympic Levi’s® gear.

We didn’t just partner with athletes and employees – we pulled fans into the outfitting process as well. Four million Americans cast their votes at retail stores across the country to pick their favorite Levi’s® Olympic uniforms. To involve the public further, LS&Co. created a “Home Team, U.S.A.” sweepstakes that allowed our customers the opportunity to send personal messages of support to the U.S. Olympic team.

Lot 501 made for gold medal winners of 1984 Olympics belonged to Brad Alan Lewis.

We also got fans involved. Four million Americans cast their votes at retail stores across the country to pick their favorite Levi’s® Olympic uniforms, and a “Home Team, U.S.A.” sweepstakes allowed our customers to send personal messages of support to the U.S. Olympic team.

At the opening ceremony of the winter Olympics that same year, Team USA marched into Sarajevo’s Kosevo Stadium fully decked out in Levi’s® jeans, flannel, sheepskin jackets and cowboy hats — part of a 32-piece wardrobe made specifically for all 119 members of Team USA.
Through the years, LS&Co. has not only been an Olympic outfitter but also a partner to fans and athletes alike. This Olympic season, we’re excited to join fans around the world and cheer on our athletes in Rio as they compete for the gold.
ABOUT THE AUTHOR