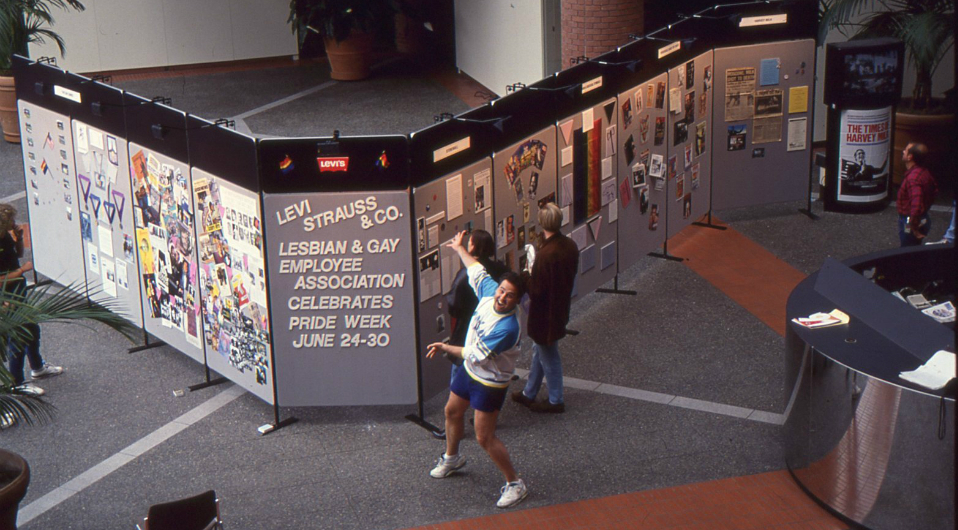 San Francisco’s Pride Parade is one of the largest and most well-known Pride events in the world. As a proud San Francisco company, LS&Co. has a long history of participating in the parade and supporting the LGBT community.

On June 30, 1991, employees from our Lesbian and Gay Employee Association (LGEA) donned their favorite Levi’s jeans and marched in the San Francisco Lesbian & Gay Freedom Day Parade. (“Pride” wasn’t officially added to the event’s name until 1995.)

Our LGEA also made a splash at our headquarters building that year. A huge banner celebrating Pride week greeted employees as they passed through the lobby:

Having a resource group of LGBT employees was unique at the time — LS&Co. was one of the first companies to support such a group. LGEA members were key to some of the company’s efforts to support workplace inclusion.

One of the group’s projects was to create a video that supported LS&Co.’s diversity training efforts. In it, LGBT employees, their parents and their managers discussed their relationships in an effort to “demystify” homosexuality.

The group, with support from management, aimed to create a culture where straight employees worked comfortably alongside openly gay colleagues.