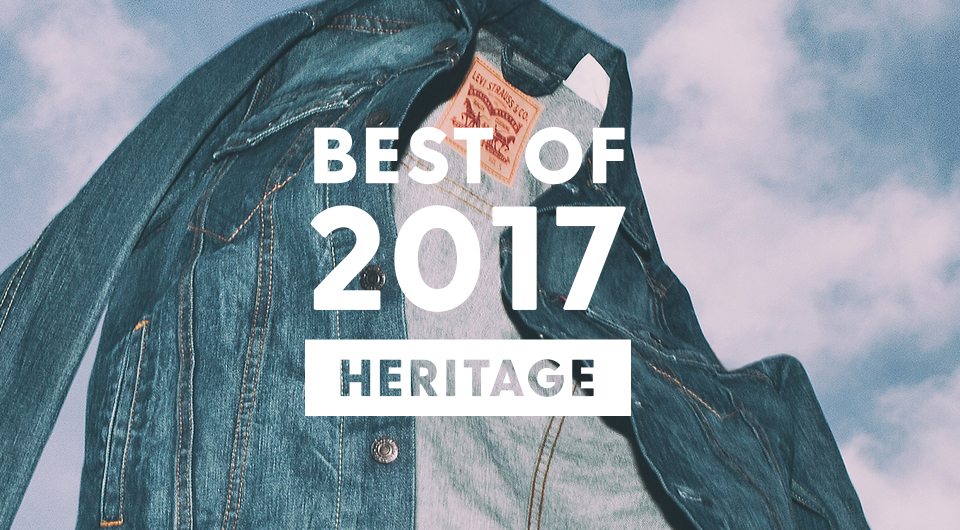 Best of 2017 – Our Favorite Heritage Moments

We’re highlighting the best of the best of 2017 from across our Unzipped coverage, featuring everything from our biggest marketing moments to some of the bigger stances we’ve taken in a tumultuous political year. Read on.

As one of the oldest, most iconic American companies, Levi Strauss & Co. takes great pride in its heritage. Our history tells an incredible story of quality product embraced the world over throughout our 164-plus year existence. And its impact on culture remains as relevant today as it did when we manufactured the world’s first blue jeans. Here are our favorite heritage moments of 2017:

Still as the fresh as the day it was conceived, the Levi’s® Trucker jacket we all know and love turned 50 years old this year.

Identified in 1967 as the Lot No. 70505 denim jacket, the Levi’s® Type III Trucker was originally designed as a companion piece to our preshrunk zippered 505 jean. It is a much-beloved – and imitated – style around the world based on its clean, flattering look and unlimited DIY possibilities.

To celebrate the anniversary, we asked 50 tastemakers and celebs to customize their own Trucker to highlight the jacket’s versatility. The brand also held various in-store activations globally, and we partnered with Rolling Stone to fete their 50th anniversary with a special Levi’s®
collection. The celebrations marked the momentous year 1967 was for our company as a whole, particularly from a marketing and product perspective. Speaking of which…

Big Year For The Batwing

Our Levi’s® logo — the Batwing — also turned 50 this year. Designed in 1967 as Levi’s® was rebranding to widen its appeal to young people, the Batwing was modeled after the Arcuate Design that’s stitched into the back pockets on Levi’s® jeans.

Its timeless appeal has only grown in popularity. With more than 3 million Batwing shirts sold in the first six months of 2017 alone, our trademark symbol continues to fly high!

Levi’s® is always at the center of culture, and in 2017, culture paid tribute.

The Levi’s® 501® and Dockers® khakis were among the iconic garments chosen to be part of The Museum of Modern Art’s first fashion exhibit in 150 years: Items: Is Fashion Modern? The 501 jeans on display are a post-World War II pair from 1947 that perfectly captures the modern blue jean — belt loops, five pockets and a straight fit without a back cinch or crotch rivet.

Meanwhile, the classic pair of 1990s-era Dockers® shown exemplifies casual businesswear, which is based on a craze we’re credited for creating – Casual Fridays.

This past fall, the Cooper-Hewitt, the Smithsonian’s museum of design, added the very first Levi’s® Commuter™ Trucker Jacket with Jacquard™ by Google to its current Making/Breaking show on innovative design. The jacket was also added to the permanent collection as a nod to
the design significance of this invention.

To celebrate the year 1967, the deYoung Museum in San Francisco showcased the Summer of Love Experience, where Levi’s® fashions were front and center. Levi Strauss & Co. was considered so integral to the examination of the dress codes of San Francisco’s counterculture that exhibit co-creator Jill D’Alessandro dedicated an entire “Denimocracy” section of the exhibition to the fabric. All told, the exhibit attracted more than 250,000 visitors — the highest exhibition attendance since the Girl with the Pearl Earring in 2013.

In the 1930s, the idea of women wearing jeans was certainly unconventional, even progressive.

Yet, Levi Strauss & Co. recognized the need for more practical and functional attire for women… introducing the first blue jeans made especially for women, Lady Levi’s®.

This year, we scored a one-of- a-kind find for our Archives — the oldest pair of women’s jeans we’ve acquired to date.

Named after its original owner, the Viola was discovered by vintage collector Samantha Canales in the linen closet of the late Viola Bedford at an estate sale in Fresno, California. It’s just one more treasure that we’ve added to our vast assortment of precious artifacts in the LS&Co. Archives. Our collection, spanning more than 140 years, is lovingly cared for here in our San Francisco headquarters by Historian Tracey Panek and an in-house conservator, and is touted around the world.