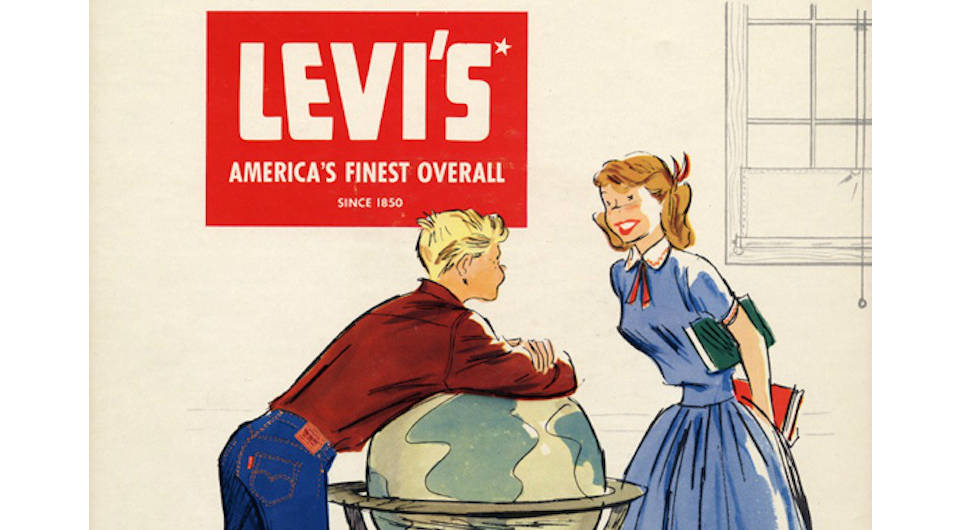 The [Occasionally] Controversial History of Denim in the Classroom

Another school year is underway and back-to-school fashion is in full effect. Whether they’re high rise flares, slim fit with stretch or an iconic straight fit, jeans are a common sight in classrooms across the country. It wasn’t, however, always the case.

After WWII, Levi Strauss & Co. started to hit the mainstream — and its stride as a widely popular jeans brand. By the 1960s, Levi’s® jeans were commonplace, but their warp-speed saturation into society left many school boards reeling. Was denim permissible attire in an institute of learning?

Levi’s For the Seats of Learning

It might seem odd now, but in the 1950s, denim was frequently depicted as a fabric worn by thrill seekers and wild, bad-boy types. Simply reference any number of the Hollywood flicks popular at the time. Take, for example, “The Wild One” starring original bad boy, Marlon Brando as leader of the irresistible The Black Rebels Motorcycle Club motorcycle gang. His signature ensemble? A black leather jacket and a pair of Levi’s® 501® jeans.

Suffice it to say, “rebels without a cause” isn’t exactly the look schools wanted to embrace in the classroom. But, thanks to the pervasive nature of Hollywood (and, of course, the fact that jeans looked downright cool), denim was the fabric that many students wanted desperately to sport.

This was by no means a denim conspiracy. Denim was, after all, an historically more casual fabric frequently found in blue-collar households and businesses — its comfort and durability made it a wardrobe mainstay among mechanic shops and motorcycle circles. So it’s hardly surprising that many school boards banned denim out of fear that the fabric demarcated a rebellious, rough and tumble lifestyle.

Levi’s® had its own campaign promoting denim in the classroom, with posters that pictured an illustration of a student in blue jeans, decreeing: “Right For School.”

The promotion caused a bit of a kerfuffle in some circles, a sentiment exemplified by a letter, now in the LS&Co. Archives, admonishing Levi’s® for suggesting students wear jeans to school.

The 1960s ushered in an era of social revolution. Denim became the de facto uniform of everyone from middle-class youth to counterculture activists, and jeans started flooding into college campuses and schoolrooms across the country. This popularity has endured, with the school hallways of the 70s, 80s, and 90s boasting plenty of denim styles — bell bottomed, bedazzled, and acid-washed, respectively.

Still Dangerous After All these Years?

So is denim’s historic 1950s-era rivalry with school boards solely a relic of the past? Not entirely. The occasional school board still adds denim to its ban list — Chicago’s Danville School Board banned denim as recently as last April. The move was controversial, though, with opponents arguing that students are more likely to excel when they’re comfortable at school. And skinny jeans are sometimes scandalous: a school in North Dakota banned slim-fitting jeans and yoga pants last October, a move that received outcry from students who suggested the school put their disciplinary efforts towards other issues, like bullying, instead.

On today’s school campuses, aside from being the garment of choice for many students, denim is often used to bring awareness to social justice causes, like the Denim Day event, which encourages students to wear the fabric into raise awareness of sexual assault. On Gay Blue Jeans Day, college students are encouraged to wear their favorite blue joins to show support for diversity and gay rights.

Meanwhile, schools aren’t just more accepting of denim wear in the classroom, they’re also insulating their school walls with the fabric. Students in Los Angeles’ Brentwood School, for instance, stay warm when the chilly marine layer blows in off of the Pacific: the walls are fully insulated with strips of denim.

Today, a trip to any U.S. schoolroom, yard, or collegiate campus will likely reveal a mosaic of denim blues in washes of all ilk, making it difficult to imagine a time when denim was considered dangerous enough to ban.