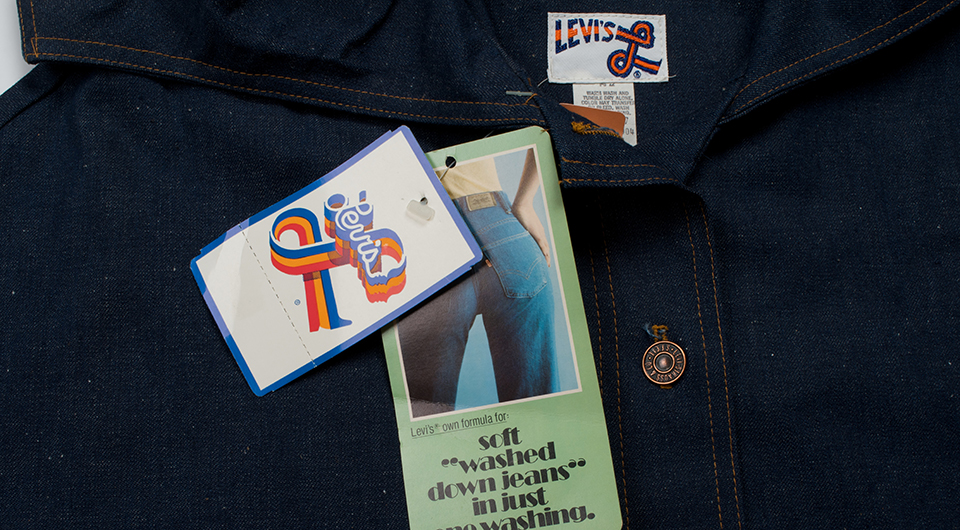 By its second year, the line reflected a “considerable expansion in style and fabric from its first showing.” New styles included Levi’s® Nuvelles, mirroring the company’s menswear jeans. In addition, the women’s groups offered five different flared leg jeans and pants, an adaptation of a Levi’s® jacket as well as a simple blue chambray shirt with a Levi’s® tab on the breast pocket.

In Europe, the line name was Miss Levi’s®, with a product line similar to the stylish looks of Levi’s® For Gals.

In addition to offerings that were similar to men’s products, Levi’s® for Gals introduced an A-line skirt, LS&Co.’s first non-pants bottom. This look may have been inspired by girls opening up the seams of their bell bottoms, making them into full-length skirts during the 1960s.

A new logo for ladies

The division introduced a colorful “L” logo forming a woman’s face in silhouette. The symbol in red, white and blue with scarf trailing and pant leg extended is a “vibrant, self-assured lovely young lady,” noted a story announcing its debut in December 1968. “And, like most young ladies, she’ll change her colors to maintain her role as a fashion leader. Even in black and white she is chic and unique.”

LFG had its own management—a general manager, national sales manager (with three regional managers and a sales force of 46), national merchandising manager, national production manager, advertising manager and designer. LFG also had a large share of female executives, including Barbara Clemens, Product Manager of LFG Casuals, who had started as a former LS&Co. mail clerk.

By 1970, Levi’s® for Gals had become the fastest growing part of the business. Saddleman’s Review reported, “LFG sales in 1970 will be about five times 1968, making LFG a dominant factor in the American women’s sportswear market.” In 1979, Levi’s® for Gals became Womenswear and in 1991, morphed into Jeans for Women.

Today, fifty years after creating a separate division, women’s continues to be a major portion of our business, with figures reaching over $1 billion in sales.