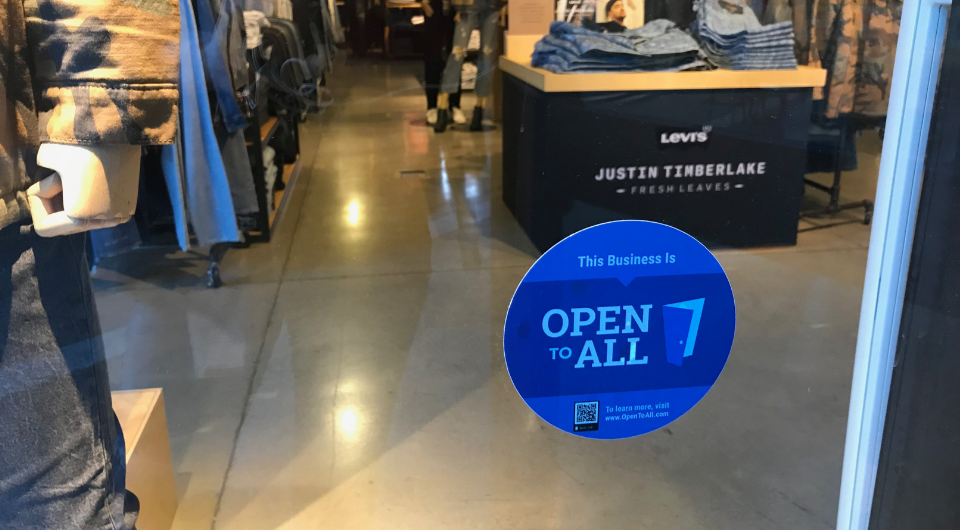 Standing Behind The “Open to All” Campaign

Our retail store windows are canvases for expressing what’s important to us – whether it’s our recent VOTE campaign or one of our favorite collaborations (that’s you, Justin Timberlake).

But there’s one recent addition to the windows in our U.S. Levi’s® and Dockers® stores that we’re wearing with extra pride these days – our “Open to All” stickers. They send a simple message: Everyone – regardless of race, ethnicity, national origin, sex, sexual orientation, gender identity and expression, religion or disability – is welcome in our stores.

Our stylists, who are the ones literally standing behind this inclusive message, say the reaction from employees and customers alike has been positive.

“I like how Levi’s has a sort of proclivity for being one with their community and not excluding anyone for whatever reason,” said Delano Butler, a store stylist at the Twelve Oaks Levi’s® Store in Novi, Michigan. “It’s not really a controversial statement, it just seems normal because that is always what we have been about.”

Levi Strauss & Co. is one of more than 1,200 businesses that have signed on to the “Open to All” campaign, which launched to focus attention on the importance of nondiscrimination laws across the country.

“It seems like Levi’s is always one of the first companies to come out and support something they believe in,” said Cody Hartman, store supervisor at the Twelve Oaks store. “That takes courage, especially being such an influential heavyweight like Levi’s. You never know how someone will react to a political statement, but that’s not what it’s about – it’s about having integrity as a brand and doing what’s right even though it might not be the path of least resistance.”

We’re proud to be a company that stands against discrimination and remains firmly “Open to All.”