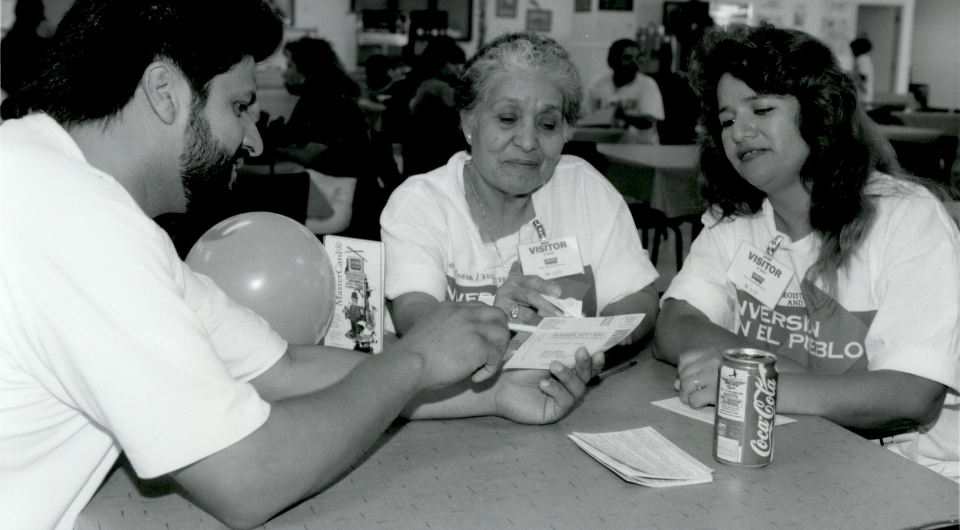 At Levi Strauss & Co. we encourage active citizenship and eligible voters to get involved in our democracy and use their vote for what matters to them. We recently announced measures to make voting easier for our employees by helping them register at the office and giving them time off of work to increase turnout on Election Day.

This isn’t the first time LS&Co. has demonstrated its commitment to the value of voting and civic participation. Founder Levi Strauss, an immigrant from Bavaria in today’s Germany, also modeled these values. He became a naturalized American citizen in the same year he founded his company in San Francisco. He was also active in civic affairs here in his adopted city, joining efforts to improve the community and causes that he cared about, from education to fire prevention.

A century later, LS&Co. continued carrying on Levi’s civics legacy. One example of these efforts was the history-making ceremony at the El Paso Civic Center in Texas. In September 1987, 662 El Paso employees were sworn in as new American citizens—the largest group of employees from one company at that time ever sworn in by U.S. Immigration officials.

In preparation for their interviews, three employee-coaches taught half-hour history and civics classes four afternoons a week at LS&Co.’s Airway plant to employees.

A decade later, LS&Co. sponsored efforts to register voters in the same city. In 1994, Carmen and Helen Gomez of the El Paso Interreligious Sponsoring Organization (EPISO) assisted Pellicano plant employees like Jesus Valtierra in filling out voter registration cards prior to the November election. EPISO volunteers registered more than 500 LS&Co. employees in El Paso before Election Day that year.

Today, LS&Co. continues to demonstrate its commitment to civic involvement and the vote.

We’re featuring stories about our voter engagement efforts here at LS&Co. all this week, and every Tuesday thereafter leading up to Election Day. Check back to learn more about how we‘re encouraging everyone – from employees to consumers – to get informed, get involved and get out to vote!