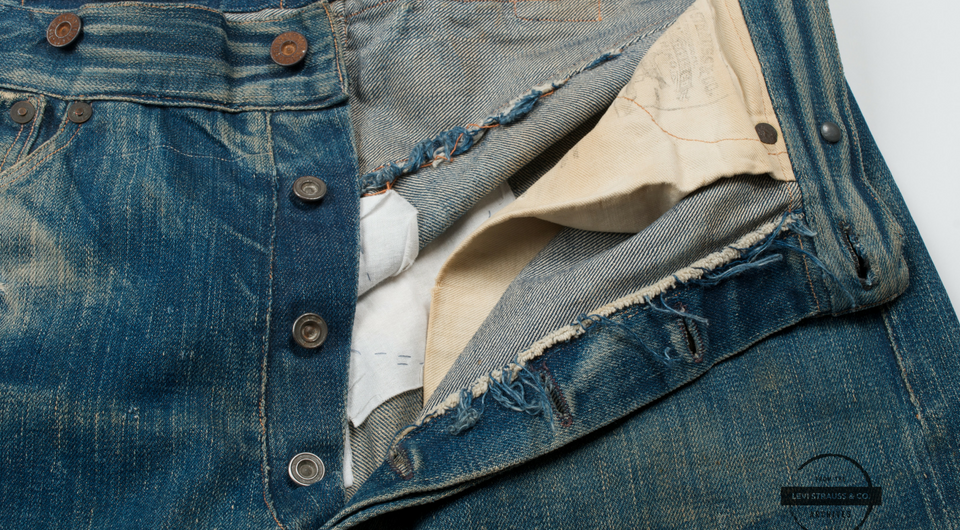 Our Fab Favorites asks LS&Co. insiders for the low-down on their top pieces in the Levi Strauss & Co. Archives. This week, I’m putting a personal spin on the series and sharing one of my own favorites.

In the four years that I have been the historian here at Levi Strauss & Co., I have met some remarkable people with amazing stories – from a real-life Rosie the Riveter to a 1970s fashion designer who dressed celebrities in outfits made from recycled Levi’s®.

But few encounters match the surprise meeting I had just one month into my job.

It began with a phone call. On the other end of the line was Barbara Hunter Kepon, who 65 years earlier had donated one of the oldest pairs of waist overalls in our Archives, a pair named Calico that dated back to 1890.

She was going to be in San Francisco and wanted to drop by to visit the jeans. Archivist Stacia Fink and I jumped at the chance to meet Barbara, who was then 83, and her daughter, Timolin.

As a teenager living in San Gabriel, California in the late 1940s, Barbara explored the Calico Mine while camping one weekend. She discovered a room filled with jeans and took the best pair of the bunch. She patched them and wore them for a time until she noticed something interesting on the pocket and wrote to LS&Co.

We went into the mine as far as we could without any flashlights. And as I was walking along the side, I felt cold air hit my foot. I got down on my hands and knees and opened up a little opening, and inside was a small room and it was full of jeans that had been torn and abandoned there by the miners …

I picked out the best looking pair of jeans in that pile and took them home because it was fashionable for young girls to wear jeans. I went home, washed them and wore them all the time, until one day I happened to notice letters on the back of the pocket … something about the jeans being made for over 17 years . . .

I realized that’s a lot longer than recently and so I wrote a letter to Levi’s and told them my story. I asked if they wanted me to send the jeans to them, and so I did. And the company then sent me two new pair of jeans.

When asked if she was familiar with the Levi’s® brand when she made her jeans discovery in the 1940s, Barbara replied: “Everybody knew the name Levi’s. Everyone in school was wearing them and I suppose that’s why I wanted to wear them.”

Meeting Barbara and learning how she discovered Calico is one of the highlights of my work here in the LS&Co. Archives, and Calico remains one of my favorite pieces to this day.