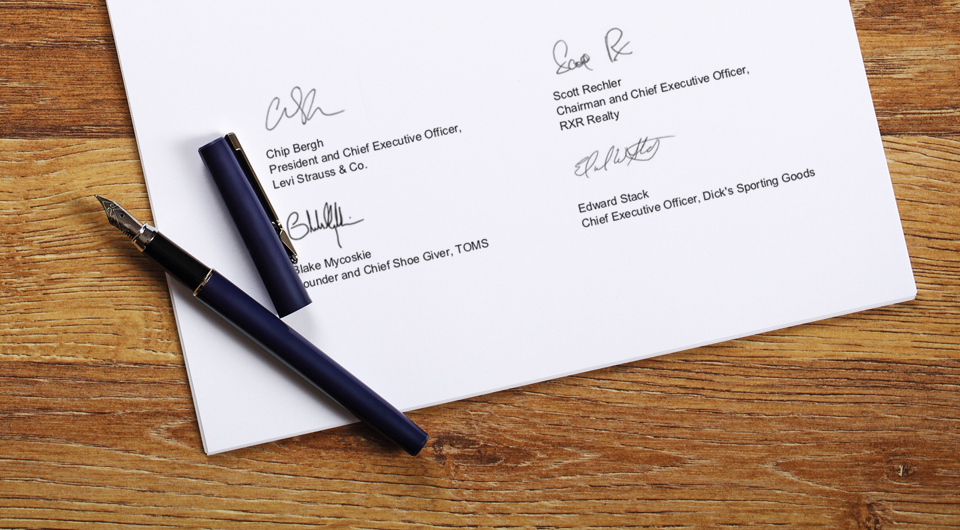 Today, Levi Strauss & Co. President and CEO Chip Bergh joined other CEOs in expressing their support for H.R. 8, The Bipartisan Background Checks Act of 2019, to require background checks on all gun sales.

The letter was co-signed by other CEOs that have taken a stand on gun violence prevention, including TOMS CEO Blake Mycoskie, Chairman and CEO of RXR Realty Scott Rechler, and Dick’s Sporting Goods CEO Edward Stack.  Each of these leaders believes it is critical for business leaders to speak out on gun violence epidemic in America.

Here is the full letter sent to members of the U.S. House of Representatives:

Dear Members of the House of Representatives:

As leaders of some of America’s most respected companies, we are writing to you because we have a responsibility and obligation to stand up for the safety of our employees, customers and all Americans in the communities we serve across the country.

America’s gun violence crisis is simply unacceptable. Every day, 100 Americans are shot and killed, and hundreds more are wounded by gun violence. In fact, every year, more than 36,000 Americans are shot and killed, including nearly 3,000 children and adolescents. It is happening all around us: on our city streets, in our schools, in our places of worship, and our places of business.

Gun violence in America is not inevitable; it’s preventable. There are steps Congress can, and must, take to prevent and reduce gun violence.

That’s why we urge the House of Representatives to stand with the American public and take action on gun safety by voting for H.R. 8, The Bipartisan Background Checks Act of 2019, to require background checks on all gun sales.

Background checks work. They save lives, and poll after poll demonstrates overwhelming support — including by a majority of gun owners — for requiring background checks on all gun sales. Since Congress established the background check system 25 years ago, background checks have blocked more than 3.5 million gun sales to prohibited purchasers, including to convicted felons, domestic abusers, and people who have been involuntarily committed.

However, in the decades since, the law requiring background checks on gun sales has not been updated to reflect how people buy guns today. H.R. 8 would update the background checks law, helping to keep guns out of the wrong hands and save people’s lives. Background checks on all gun sales are a common-sense solution and a foundational step toward stemming the gun violence epidemic in this country.

It is time for Congress to take action.

This isn’t the first time Levi Strauss & Co. has taken a stand on this issue. In September 2018, the company stepped up its gun violence prevention support, including the establishment of the Safer Tomorrow Fund, directing more than $1 million in philanthropic grants to support nonprofits and youth activists working to end gun violence in America.