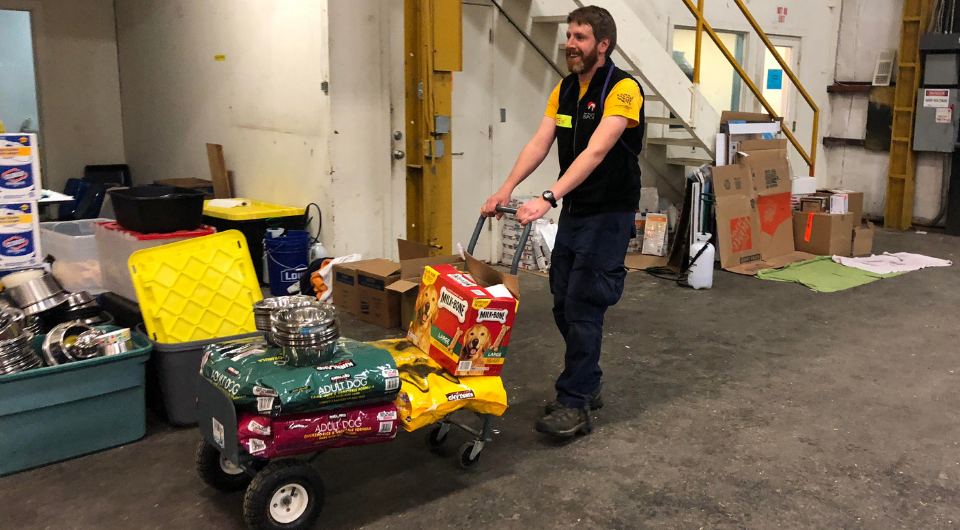 Caring for Pets in Crisis – An Employee Gives Back

Last fall, the deadliest and most destructive wildfire in California’s history tore through Butte County, killing dozens of people, countless animals and destroying the entire town of Paradise.

Among the volunteers who helped victims through the crisis was Levi Strauss & Co. employee Drew Cottrell, who takes advantage of the five hours a month we allow our employees for volunteering. He was recently deployed to help displaced pets as part of the Humane Society of United States Animal Rescue Team.

The Animal Rescue Team supports local law enforcement and animal shelters during large-scale disasters and incidents of animal abuse and neglect. Drew joined the Animal Rescue Team on Dec. 1 at a temporary shelter that had been set up in a large industrial space in Butte County.

There, he and other volunteers did routine daily care like feeding, walking and cleaning up after hundreds of dogs, cats, birds and bunnies whose families lost their homes in the Camp Fire. Approximately 2,000 pets were sheltered during the disaster, according to media reports.

“Even if the world isn’t ending, to them it feels that way,” Drew said. “They were scared and vulnerable and it was rewarding to help them and their owners through such a difficult time.”

For people whose lives had been upended so quickly, knowing their pet was safe brought them great comfort and relief. Some people had fled the fire not knowing if their pets had survived. Others who were waiting for a housing situation that could accommodate their pet would come by the shelter just to spend time with their animal. Day after day, a few more animals would be returned to their families.

“There were a lot of tearful, joyful reunions,” Drew said. “People were very grateful. All in all, it was emotionally taxing but very rewarding work.”