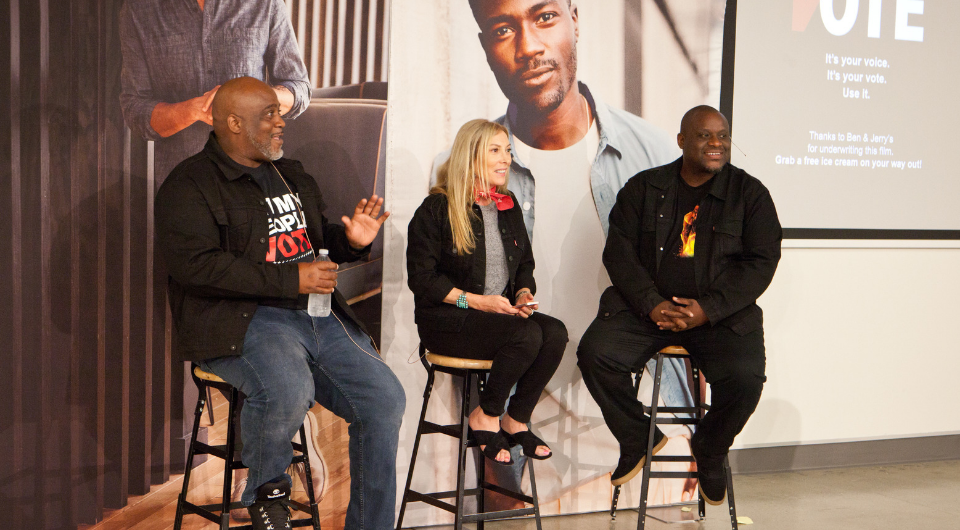 Fighting For A Second Chance to Vote in Florida

If Desmond Meade has his way, there are 1.5 million people in Florida who will regain the right to vote in November – the largest re-enfranchisement of voters in history besides the Voting Rights Act of 1965.

Florida has some of the toughest laws in the country preventing people with felony convictions from voting, often for life. In addition to more serious violent crimes, felonies in that state can result from low-level infractions like driving on a suspended license.

Desmond, who isn’t able to vote because of his own felony conviction and subsequent time in prison, heads up the Florida Rights Restoration Coalition, which is backing a measure on the Nov. 6 ballot in Florida to reinstate the voting rights of formerly incarcerated people who have served their time. A new documentary called “Let My People Vote” covers a day in the life of Desmond as he canvases door-to-door to make sure others have a chance to do what he can’t: vote.  The film was partially underwritten by the Levi Strauss Foundation.

Desmond visited Levi Strauss & Co. – accompanied by the “Let My People Vote” producer Gilda Brasch and fellow organizer and Levi Strauss Foundation grantee Pastor Mike McBride –  to share the documentary and talk with employees about voter disenfranchisement in America – and why no one should take their right to vote for granted.

On his personal journey to activism

I’m a person that’s been in trouble primarily because of a drug addiction. It got me in and out of jail and then eventually prison, and eventually I ended up standing in front of the railroad tracks, ready to jump in front of a train.

That train didn’t come, and I crossed those tracks. I experienced a transformation over the next several months. Part of it was due to Rosa Parks’ passing away and seeing the outpouring of love, and me reflecting back … If I died today, how many people would come to my funeral? And the answer was, nobody.

It [made me] question, what was my purpose in life?

So when you ask me, what propels me to this work … What I know is, a chain is only as strong as our weakest link. And that’s the same in our society. If we really want our community and our society to become better, we have to empower the weakest among us.

My life was dedicated toward the homeless, toward convicts, toward the drug addicts … These are the people that if we lift up, we become greater for doing so, but we also become a stronger, more vibrant community.

Every day, I wake up, my job is focused on what can I do to make the world a better place, to put a smile on your face, to give you hope that there is a better tomorrow – that’s what keeps me going.

On the Voting Restoration Amendment

[It will] strike a fatal blow to Jim Crow, and enfranchise such a significant number of people.

That’s the same spirit that our campaign embraced. We didn’t care about how a person may vote, what we cared about was that they had the opportunity to vote once they served their time.

This serves as a shining example of what we as human beings can do when we’re able to transcend partisan politics, racial insecurities, gender insecurities and just come together along the lines of humanity.

We can make things happen, we can do great things in this country and in this world.

On why the campaign resonates with so many

How many people right now will say you don’t ever want to be forgiven for anything you’ve ever done? That’s where we get them, right there. Because deep inside every one of us is that concept of forgiveness.

What I found [when talking to people about the campaign] was, when I was able to overlook the labels and overlook the self-imposed barriers and just talk to people like just a regular human being …  I found we had more in common than we did that separated us. That’s that sweet spot that we have to protect. We have to find it and we have to protect it if we’re talking about changing the direction this country is going.

We‘re featuring stories about our voter engagement efforts here at LS&Co. all this week, and every Tuesday in October, in a lead up to Election Day. Check back to learn more about how we‘re encouraging everyone – from employees to consumers – to get informed, get involved and get out to vote!