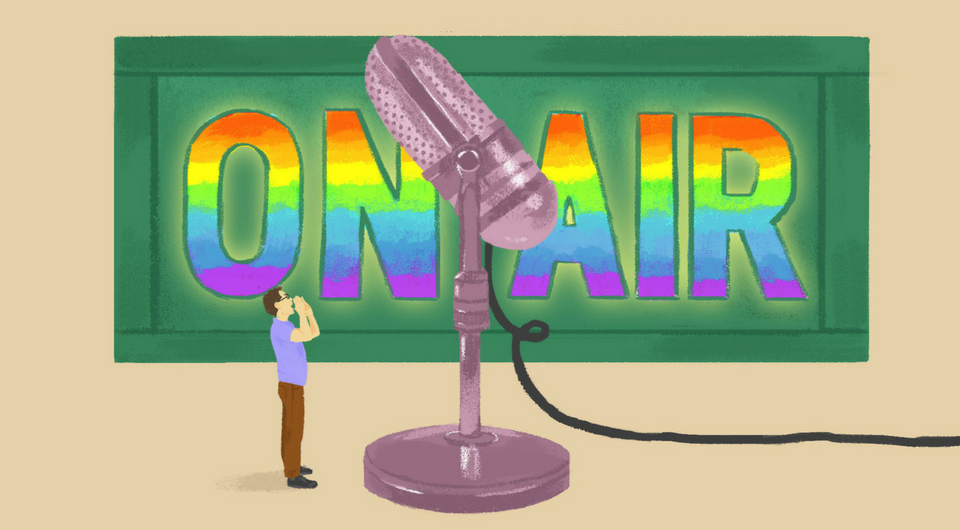 As much as Pride Month is about being seen, it’s also about being heard. That’s why StoryCorps and Levi Strauss & Co. are partnering during this Pride season to bring to life powerful conversations from the StoryCorps collection of LGBTQ oral histories. StoryCorps is committed to making its archives inclusive of the diversity of American voices, and LS&Co. has championed LGBTQ rights for decades, making the storytelling partnership a perfect fit.

If you don’t already know StoryCorps, listen up: we’re a non-profit oral history project that began in 2003, with a single recording booth in New York City’s Grand Central Terminal. The booth was a special listening space where two people could hold a conversation about the things that matter most. And because our founder Dave Isay believes every voice is important and deserves preserving, the conversations were recorded, with a copy going home with the participants and another copy archived at the Library of Congress. Today, the booths still operate that way, but all across the country.

Though storytellers can record conversations about whatever they want, sometimes we feel inspired to create interview collections with a theme that speaks to an important chapter in the American experience or a community historically underrepresented in our collective narrative. In 2014, StoryCorps began a documentary initiative called OutLoud, with a specific focus on preserving the voices and stories of the LGBTQ communities.

This Pride Month, LS&Co. helped us select and illustrate three OutLoud interviews that together remind us that LGBTQ stories are also family stories, and love stories, and empowerment stories. We hope you’ll take a few minutes to hear and honor our storytellers, Diedra Robinson and William Watford III; Tracy Johnson and Sandra Johnson; and Paul Corbit Brown and John Brown.

Diedra Robinson and her father, William Watford III, were extremely close—until he found out she was gay. They came to StoryCorps in Homewood, Alabama, to talk about how they found their way back to one another.

North Carolina National Guardsman Tracy Johnson is an Iraq war veteran, and an Army widow. Her wife, Staff Sergeant Donna Johnson, was killed in Afghanistan in 2012. At first the Army did not recognize Tracy as Donna’s next of kin, but relented after the intervention of Sandra Johnson, Tracy’s mother-in-law and the late Donna’s mother. At StoryCorps, the women talked about finding out their wife and daughter wasn’t coming home.

Several years ago, Paul Corbit Brown was driving to work when he tuned his radio to a station whose announcer was saying terrible things about gay people. He pulled over to a pay phone and called the station to complain. When they asked him to go on-air to provide a counterpoint, he had a decision to make. Here, he tells his brother John about finding his voice.