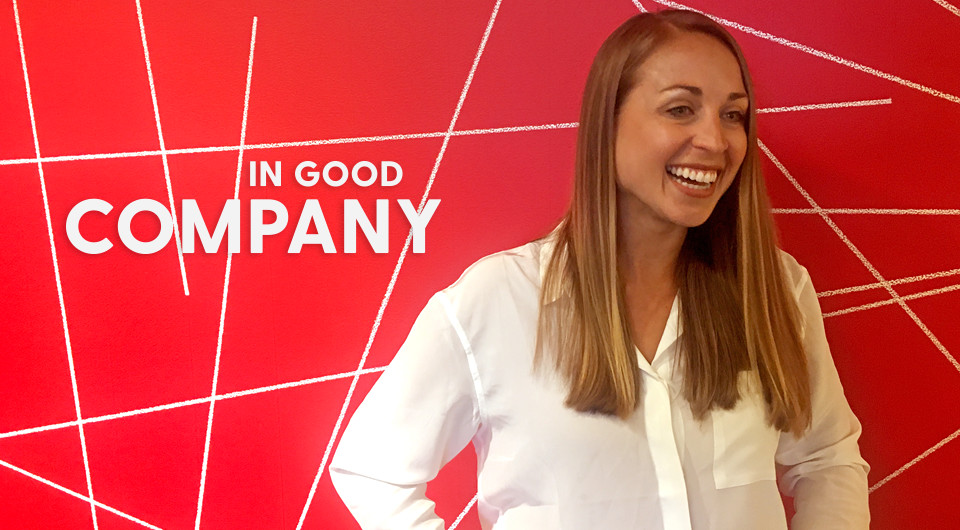 We are nothing without our people. The people who are driven each day to build upon the long legacy of Levi Strauss & Co. Since 1873, our jeans and those who contribute to their design and production have been an inspiration — and a symbol — for unwavering originality. We’re ‘In Good Company.’

For Jenny Calvert Rodriguez, a good day at the office means more than just a presentation gone well or kudos from the boss – it means a family that will have shelter that night, a retiree who gets the glasses they need, or an employee who gets a much-needed reprieve from a mounting stack of unpaid bills.

Jenny is the senior manager of global programs at the Red Tab Foundation, which provides emergency financial assistance to Levi Strauss & Co. employees and retirees in need.

“I get to walk out at the end of the day and know that I really helped someone out in a very tangible way,” she said.

There are dramatic stories, like the Polish employee whose baby daughter had birth deformities and got the medical help that made it possible for her to use her hands. Or the factory worker in South Africa whose ambitions were stymied by a treatable eye condition he couldn’t afford to fix until the Red Tab Foundation stepped in.

“But really the stories that touch me the most are the single moms whose kid gets sick and they have to take unpaid time off work – and we’re there to make sure they don’t lose their house or their car, or their utilities don’t get shut off,” Jenny said. “We don’t really have a safety net like that in the United States for working people. It feels like we’re filling a gap that’s really necessary.”

A focus on social good

Jenny always knew she wanted to work in the social good sector. She started by interning with a state senator, “but the bureaucracy drove me crazy.” She then worked in nonprofits, spent time volunteering in Uganda and jumped through the hoops to join the State Department diplomatic corps.

Back in grad school, she found herself drawn to corporate philanthropy. “I recognized that this was sort of a blank space, where there’s a ton of resources and a lot of good energy in businesses to do the right thing – but the mechanisms to do that weren’t always very well fleshed out,” she said. “Levi Strauss & Co. is the exception to that.”

Jenny knew something of LS&Co.’s reputation from her grandmother’s stories of childhood growing up in San Francisco. She used to talk admiringly of how the company kept its doors open after the 1906 earthquake, even though there wasn’t much work to be done, just so people wouldn’t lose their jobs.

“The more research I did, the more impressed I was that LS&Co. was not just a company that said they were doing the right thing, it was actually embedded in its values,” she said. “They had a history of doing that before it was the thing to do.”

It didn’t hurt that her other link to Levi’s® was the memory of a dark denim Trucker jacket with slightly flared sleeves, a gift from her sister-in-law (a designer for the company) that made her feel like the absolute epitome of cool in the 6th grade.

So, armed with an appreciation for the company’s products and a desire to make a difference, Jenny came to work for the Red Tab Foundation in 2015. One of the first employee assistance funds in existence, Red Tab was created in 1981 by company leader Jerry O’Shea, who put his own money into the foundation when he retired as a way to give back. These days, the foundation is funded by a mix of employee and retiree donations, and contributions from the Haas family and the Levi Strauss Foundation.

While Red Tab has mostly focused on emergency intervention in the past, Jenny is particularly excited by a new push toward more preventive initiatives like the Red Tab Savers program, which incentivizes retail employees to save with a matching program and offers financial planning tools to help them build up a cushion to protect against a crisis in the first place.

Jenny also oversees the foundation’s international case load, and this month she got a first-hand glimpse into the lives of factory workers through an LS&Co. Service Corps trip to a partner factory in Sri Lanka. The Service Corps program lets corporate employees experience factory life and see the company’s Worker Well-being standards in action.

Jenny brought home a better understanding of the realities factory workers face, a cookbook so she can try to reproduce the flavors she fell in love with and a good dose of humility.

“It really flipped the value equation in my head,” she said. “There would be no business if not for the many hours and skills of the people who are in that factory.”

She laughed, and added, “It was a good reminder for me: Be humble – your job is not that important.”

Of course, scores of employees impacted by her day job would argue otherwise.