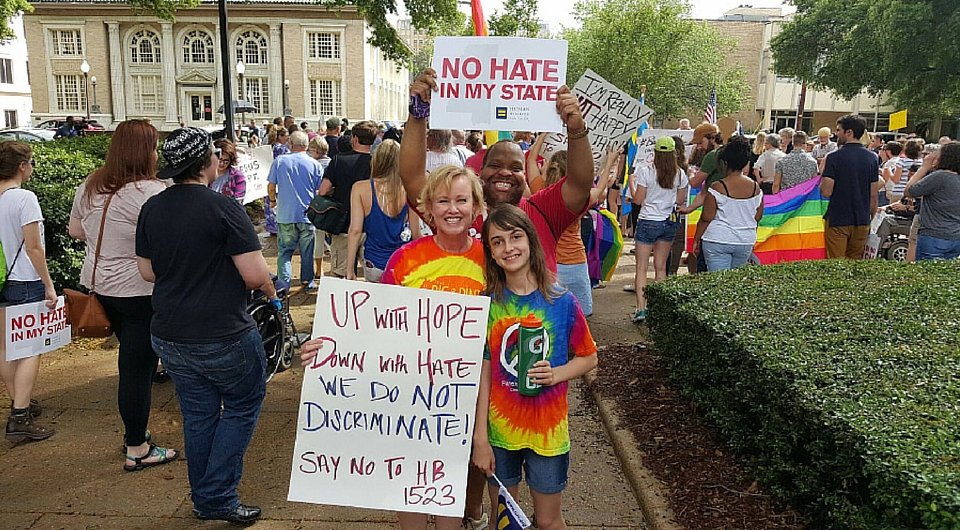 Fighting for LGBTQ Equality in the South

The Human Rights Campaign launched Project One America in 2014 with an ambitious goal: change hearts and minds in the face of Lesbian, Gay, Bisexual, Transgender and Queer discrimination and stigma in the South. Since then, HRC has established permanent offices in Mississippi, Alabama and Arkansas and hired local staff who focus on LGBTQ progress in their community, their city, their state and in the South as a whole.
This work can be challenging and, as recent events like the tragedy in Orlando demonstrate, we need to remain vigilant and committed to the fight for LGBTQ equality despite having achieved nationwide marriage equality and other great victories preventing discrimination.
A key part of the work of Project One America is showing that LGBTQ people exist in every community – we are your friends, your coworkers, your neighbors, your fellow churchgoers. By speaking up and speaking out about LGBTQ equality, we aim to root out hate and educate our neighbors about what it means to be LGBTQ and how it is nothing to fear or demonize. Engaging our neighbors on the subject can be tough, but it can also be transformational.
HRC doesn’t just work to change hearts and minds, we also work to change laws. Project One America operates in states with strong legislative and executive headwinds, but it has nevertheless managed to secure key victories for LGBTQ equality in the South, and, importantly, played a role in stopping bills that could do great harm to LGBTQ people.
This May in Alabama, HRC advocated for the successful repeal of Oxford, Alabama’s regressive anti-transgender law, sending a welcoming message to trans individuals in Oxford, and showing the harmful consequences cities can face when they are anti-equality – consequences that North Carolina is feeling with its similar, but broader House Bill 2.
In Arkansas, HRC has worked closely with hospitals in the region to educate them on best practices for healthcare of LGBTQ individuals, even securing two new hospitals as part of HRC’s Healthcare Equality Index, which rates and evaluates healthcare policies for LGBTQ patients.
In Mississippi, we have been leading an ongoing campaign against H.B. 1523, which would allow individuals and organizations to discriminate against LGBTQ Mississippians at work, at school and in their communities. While leading this effort, HRC Mississippi has garnered more than 200 signers to the “Equality is Our Business” program, which tells Gov. Phil Bryant and the legislature that businesses will not stand for discrimination in Mississippi. In May, we held a rally to allow Mississippians to voice their opposition to HB 1523.  Nearly 500 supporters and advocates came out, including many Levi Strauss & Co. employees. The support and effort shown by these volunteers was an amazing representation of the company at large and reinforced how fortunate HRC is to have the support of many from the business community, including Levi Strauss & Co.
Often, the most compelling argument to get legislators to act is one based on business or economic concerns. As we’ve seen in Mississippi, businesses want no part of a community that does not support equality. Businesses can vote with their feet just like citizens: companies like Levi Strauss & Co. do not want to park offices or employees in places that are not friendly to LGBTQ people. But it’s not just about money: the advocacy and volunteer efforts of large companies to promote LGBTQ equality are important as well, as they show employees who are LGBTQ that their company cares about them. And, companies can often be leaders in providing resources to employees who may not understand LGBTQ issues, which can lead to more changed hearts and minds.
We have a lot of work ahead of us, but we are pleased to see steady, incremental progress, and we deeply appreciate those who have helped us make that change possible.