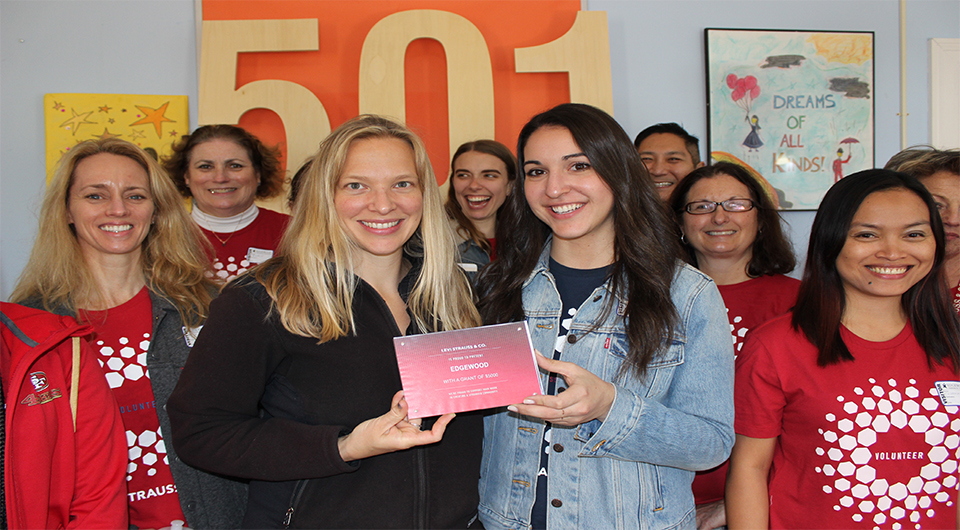 It’s not often that an organization is fortunate enough to partner with one of San Francisco’s truly historic companies for over 160 years – but we at Edgewood Center for Children and Families are fortunate to be the anomaly.
Edgewood is a nonprofit organization that provides residential, community, and school-based programs that help thousands of children and their families who struggle with mental and behavioral health issues.
Founded in 1851, Edgewood started as a gold rush orphanage, and is the oldest children’s charity in the western United States. In 1854, Levi Strauss donated $100 to Edgewood and thus began a partnership between two historic organizations that is imbedded in the fabric of San Francisco. Now, 162 years later, Edgewood and LS&Co. are still partnering in support of 7,000 kids and families in crisis throughout the San Francisco Bay Area each year.

Every May, Edgewood participates in LS&Co.’s annual Community Day. Sized beforehand, each Edgewood youth who lives in one of our residential cottages, or who is enrolled in our Day Treatment campus schools, receives Levi’s® products and the opportunity to select a head-to-toe look at a “Pop-Up Shop” on campus – including jeans, trucker jackets, hoodies, and backpacks. These new Levi’s® outfits are extra special for our youth as many arrive at Edgewood with little to no clothing –hip Levi’s® brings endless smiles to young faces.
This year marks the 165th anniversary of Edgewood’s founding and the 50th anniversary of the Edgewood Fair. To mark this historic year and partnership, Edgewood was pleased to honor Levi Strauss & Co. with its first-ever Legacy Partner Award at this year’s Fair in April.

Levi Strauss & Co. is our Legacy Partner for many reasons, and not just because of that $100 donation back in 1854. We love welcoming Levi Strauss & Co. volunteers each year on Community Day, and we are grateful for the annual grants received in support of programming – including the $20,000 grant received in honor of this historic year.

We also laud the creative and sustainable investment in our campus projects, including the donation of the drip irrigation system in our Edgewood Garden Learning Center, and the Levi’s® denim insulation inside the walls of our Garden Arts classroom. We are honored to count Levi Strauss & Co. as a partner in Edgewood’s mission of promoting the behavioral health of children, youth, and families and supporting a positive transition to adulthood.
We look forward to another century of partnership and support of restoring hope and transforming lives of the kids and families in the Bay Area.
Learn more about Edgewood Center for Children and Families at Edgewood.org.