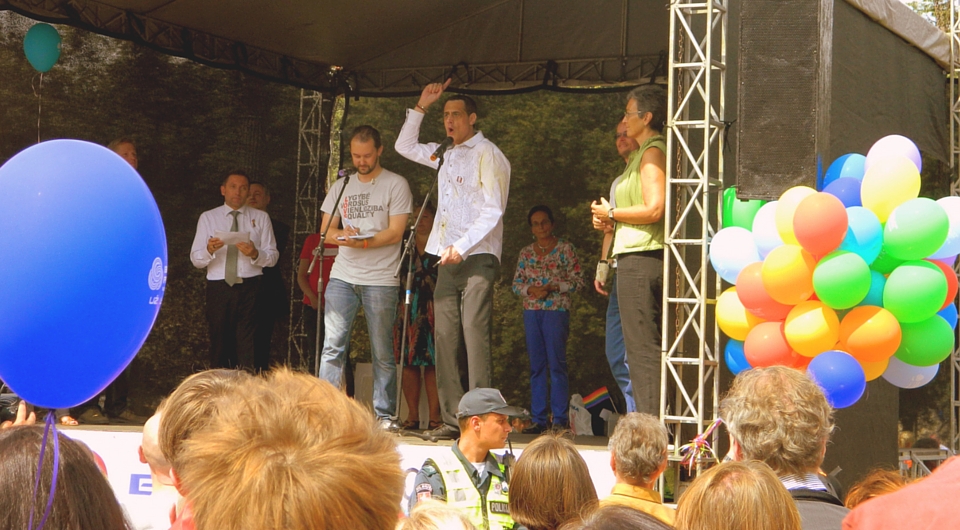 Levi Strauss & Co. has had a strong record of giving back ever since its founder, Levi Strauss, made a $5 donation to a children’s center in 1854.
Levi Strauss also had a storied history of global personal connections. Back in 1872, Levi partnered with Jacob Davis, a Jewish immigrant from the Baltic nation of Latvia, and together they received the patent for the original riveted jeans. And when the Milk Foundation supports the struggling LGBT community at Baltic Pride again this June, on the ground in Lithuania, we will feel the connection not only with Uncle Harvey, a first-generation Jewish immigrant from the Baltic region, but also with Levi and his partner from the Baltics, Jacob.
A decade ago, the epicenter of the national struggle for marriage equality was here in California at exactly the time the movie Milk was to have its world premiere, and it was Levi Strauss & Co. that stepped right up to become the main sponsor of not only the premiere but also the community celebration of Harvey’s legacy of hope. It was a grand celebration of Harvey’s story of inclusion and collaboration, and with LS&Co.’s support, that celebration provided our community with hope at a time when we needed it most, as our marriage equality struggle was dealt a temporary, but devastating, defeat at the ballot box.

We went on to win that marriage equality struggle last year in the U.S., and the unwavering public and visible support of LGBT people by leading companies like LS&Co. cannot be diminished. LS&Co.’s proud history of supporting the diversity of its workforce, inclusive of LGBT people, is one that we should all recognize and share broadly across the globe. And LS&Co.’s support this year of the groundbreaking work done every day by teams of Milk Foundation volunteers around the globe is not just financial, but includes a worldwide visibility campaign through its latest Pride Collection: Levi’s® x Harvey Milk Foundation. Harvey knew that visibility was the key to advancing human rights, and today that visibility remains an essential need in all corners of the globe.
The Harvey Milk Foundation provides on-the-ground support and award-winning programing to struggling and emerging LGBT and intersectional minority communities on six continents with more than four dozen dedicated volunteer leaders and long-term partnerships in 31 nations. The foundation’s goal is to use the power of Harvey Milk’s story, style, and example to stand up for those who aren’t always accepted into the mainstream, and provide a lifeline of hope across the globe to all who struggle.
Both Harvey and Levi realized that giving back is an essential part of moving forward. Harvey changed the world by challenging all of us to be visible and by standing up for everyone who was suppressed and marginalized. LS&Co., with its history of partnering with leading nonprofits like the Harvey Milk Foundation, and through its global giving back programs like Community Day, is creating change that moves us all forward, even when the issue is not the easiest or safest. It is only through the courage to stand up for what should be that the world moves toward what it can be. It was this hope that Harvey always spoke of, and that LS&Co. brings to life through its strong corporate support.
By partnering with the nonprofit community on LS&Co.’s Community Day — with teams from LS&Co. working alongside volunteers from the Harvey Milk Foundation and volunteers from other leading nonprofits — we do in fact move the world toward that better place that Harvey dreamed about: A world where hope is sustained and visibility is broadly supported, a better world community where everyone can live authentically. (In Levi’s, of course!)