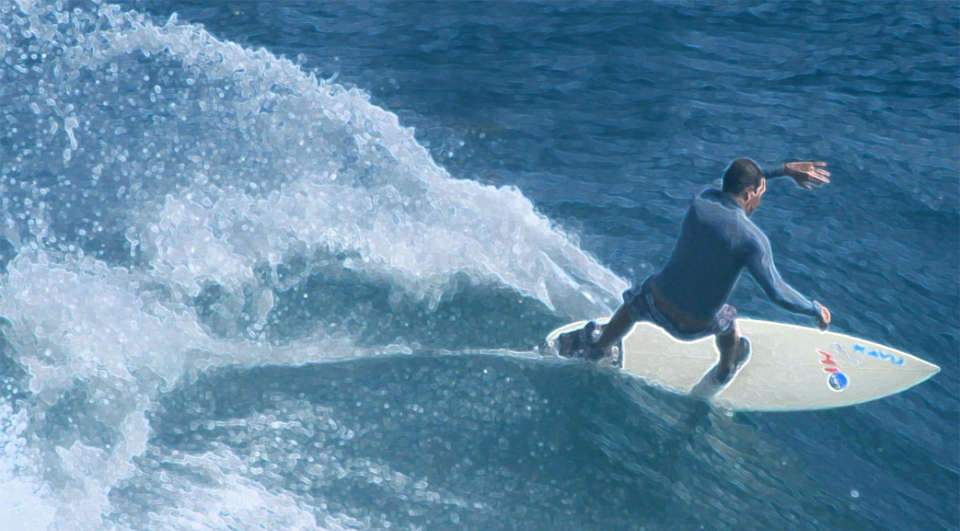 Michael Stewart and Kevin Whilden got to know each other on the swells of Ocean Beach in San Francisco, CA in 2008. At the time, both were living in the nearby Presidio neighborhood and working for organizations focused on solving climate change. Michael was in the nonprofit world and Kevin was involved in the policy, science and research side of things. Both shared a love and passion for surfing, and they often found themselves on the same schedule of heading to the beach to surf before work.

Continuing to cross paths, and spending time out in the water together, waiting for waves, got them thinking and talking about the connections between their professional lives and personal passion for surfing. Both were unsettled about how the tide was turning (pun intended) on people’s belief in climate change, and felt that they needed to be doing something else to make environmental issues feel real to people. Michael and Kevin realized that perhaps it wasn’t about throwing out more numbers, but reaching people in a new way. As it turned out, the answer was already at their feet. From these conversations, Sustainable Surf was born.

Sustainable Surf is dedicated to “being the catalyst that transforms surf culture into a powerful force for protecting the ocean playground.” Their three main programs aim to engage individuals and the surf industry at large around climate change as well as promote more environmentally sustainable practices. The goal is to look at the biggest environmental challenges through the lens of surf culture, and find ways to make these challenges relevant to people’s lives – especially to those who surf.

We chatted with co-founder Michael Stewart to learn more about Sustainable Surf: what makes them different in their approach, who they hope to inspire and the bigger life lessons that surfing teaches.

How do you make environmental issues and climate change relevant to surfers?

This fact tends to get surfers’ attention: At the rate we are going, it’s estimated that about ninety percent of all coral reefs will be destroyed by human actions by about 2040. The best surfing spots—where the professional surfers go to catch waves—are formed over living coral reefs. 130 million people around the world self-identify as a surfer or as part of surf culture, and that number is growing. Meanwhile, oceans are becoming more acidic as carbon dioxide is being absorbed back into the ocean. Though you can’t actually feel the water becoming more acidic, it does affect coral reefs and therefore the quality of surfing waves.

Another issue we focus on is the rapid rise in sea level. As oceans get warmer, water is expanding, meaning the molecules take up more room, which is what causes the sea level to rise. It’s estimated that that oceans will rise 3.5 feet by the end of this century, which has huge implications for infrastructure and beaches. We’re literally losing ground. In addition to beaches being threatened, surfers don’t like to surf at high tide – the waves are mushier and they don’t break well—so rising sea levels would be like a permanent high tide. Once you start talking about how climate change would mean surfing less often and on worse waves, this motivates surfers to want to do something.

Can you talk more about your main programs: Waste to Waves, The ECOBOARD Project, and Deep Blue Surfing Events?

While plastic bottles are by far the most common thing that washes up on beaches, we realized that expanded polystyrene, commonly known as Styrofoam, is also a huge problem. Previously, there wasn’t a mechanism for recycling it, and, because it breaks into tiny balls over time, Styrofoam often finds it way to the ocean. We had a light bulb moment when we realized that the surfboards are made from the same material. Waste to Waves is a recycling program that collects old packaging foam at retail surf shops across California (and now Hawaii), and uses this donated foam to produce new surfboards out of it. It’s been a hugely successful program, and we work with top brands and surfers who are also interested in closing this loop.

The ECOBOARD Project grew out of people’s interest in buying eco-friendly boards and provides a system and certification process to indicate such options – think of it like the fair-trade or organic labeling on food. It is the surfing industry’s first consumer-facing “eco-label” for surfboards. We’re looking to transform the industry away from its current toxic and energy-intensive methods into a model of what sustainable manufacturing should look like. Many of the world’s leading surfboard brands are adopting our ECOBOARD seal, and our goal is to totally shift the global supply chain to use just our approved materials.

Deep Blue Surfing Events refer to our effort around making professional surfing events more sustainable. The program has been up and running for 4 years now, and we’ve worked with 18 of the top world tour surfing events, including the Vans Triple Crown. Some of the requirements for a Deep Blue Surfing Event are related to waste management: enforcing composting and recycling, as well as beach clean ups at the end of each day. Other requirements include using organic food catering services and giving back to the local community. We calculate the carbon footprint that each event has, including flights for everyone attending these events, and find ways to use this information to inspire and educate a global audience around behavioral and operational improvements.

Do you think that being a surfer makes you more naturally inclined to care about the environment? Or is it the reverse?

I think there is something about being a surfer that makes you not just notice the world around you, but really pay attention to it. Surfing is out in the ocean, and the field is constantly changing. You have to know what is happening in front of you, but also be aware in the wider sense to position yourself, and to anticipate how the waves will crash. Being a surfer means paying attention, and this definitely has implications for society at large. If you have more people paying attention to what’s going on, then you can have more positive outcomes. This is how we think solving climate change will happen.

Learning how to pay attention is also such a valuable skill for every aspect of your life. The act of surfing led me to be an entrepreneur, to be interested in the wider world – in art, design, music, and ultimately the ocean environment – and wanting to protect it.

Can you explain Sustainable Surf’s “systems approach” to climate change?

We’re not a one-issue organization – we’re not just doing beach clean up or trying to save the whales. We also don’t just have a new product that we’re trying to sell you. We see ourselves as a catalyst to help individuals and businesses get more involved in these issues. When we think about solving climate change, we’re not looking at palliative care for the ocean, but preventative. We recognize that to make real change, it’s about getting bigger entities involved around the most pressing environmental issues facing our oceans. Once these companies get on board, they get excited about it, and they push harder and faster for change, more than we could as a smaller organization. Making larger companies advocates for eco-friendly practices helps to raise the bar across the industry.

What inspires you to do this work every day?

I have a three and a half year-old daughter, and I’m inspired to give the next generation the same things that motivated me to get on the path that I’m on now. Protecting the environment, specifically the ocean environment, remains the driving force for me. Learning how to not just protect and save how it is now, but to make it better than how it was handed to me, is my gift back to my own child, to the wider country and to the world. I think that’s ultimately what good work is, not just taking from something, but becoming a part of the process, the culture and the community that actually gives back and makes it better. And teaching the people you are passing it on to that they should do the same.

Levi’s is an American brand. It’s something I grew up with and identify with. I always wanted Levi’s jeans. As a surfer, one of the key things that you need for your wardrobe is one really good pair of jeans, jeans you can live in. You don’t get more authentic than Levi’s. Every surfer that started out in the 1950’s and ‘60s was wearing a pair. I was stoked to learn about the Water<Less campaign. These are the types of changes that we’re pushing in the surfing industry and would love to see more of. As a well-known company, Levi’s can also help bring these issues to the attention of the general public.

This is part of an ongoing series designed to feature people who are changing the world. Our Modern Day Pioneers are impacting everything from culture to social issues to the environment, and they’re challenging the status quo in a unique way. We hope these stories will inspire and empower you to live your life to its fullest in Levi’s®.

Want more stories like this? Sign up for our weekly Unzipped email or view more stories from our Modern Day Pioneers series. 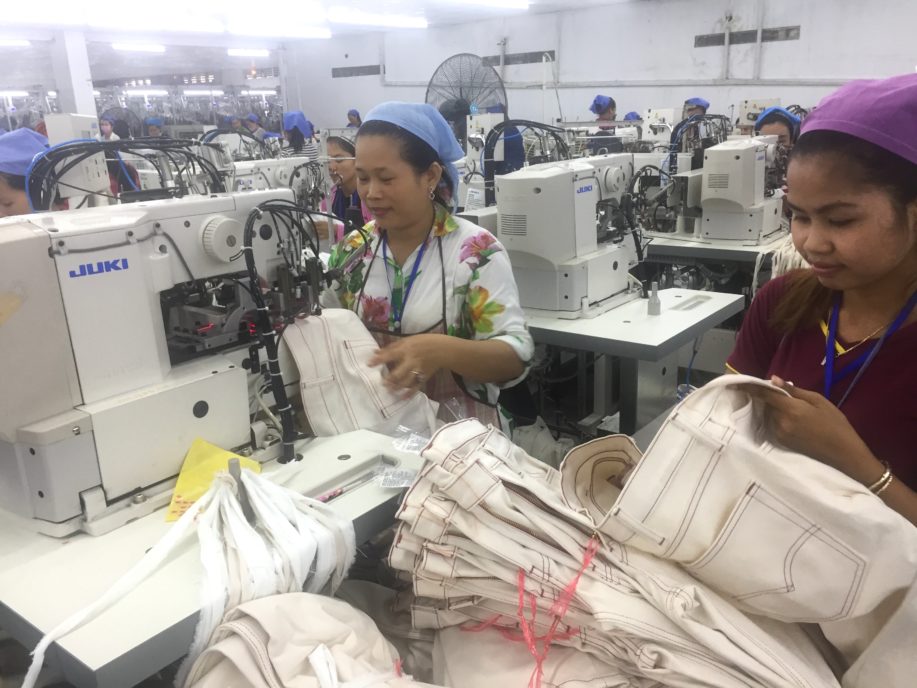