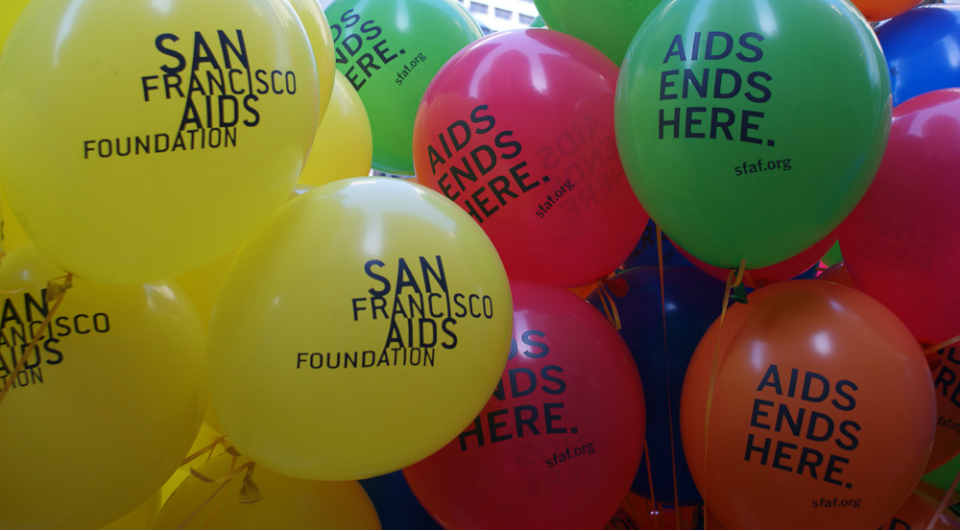 The Long Road to Ending HIV Transmission in San Francisco

To borrow a line from Greek philosopher Heraclitus, “everything changes and nothing stands still.” It’s an astute observation, especially when taken in the context of an epidemic like HIV/AIDS, which has changed dramatically over the past 30+ years due to advances in science, treatment and successful advocacy and policy initiatives.

Though the needs of the community have shifted as the epidemic has evolved, Levi Strauss Foundation (LSF) has remained steadfast in its decades-long commitment to achieving an HIV-free generation. One way the organization fulfills this goal is by partnering with pioneering leaders in the space, such as the San Francisco AIDS Foundation (SFAF).

Over the years, the SFAF has expanded its reach to individuals who are most at risk for HIV. To do that, the organization now offers a spectrum of programs and direct services that support the whole individual through sexual health services, substance and mental health counseling, medical case management, community education and coalition building, and public affairs and advocacy. Their ultimate mission is to make San Francisco the first U.S. city to end HIV transmission.

LSF’s partnership with the SFAF began in 1982 (the same year the latter was formed), making it one of LSF’s longest-standing grantees. Rod Seymore, LS&Co.’s Sr. Director of Global Ethics and Compliance has been engaged with SFAF for a number of years, serving on its board of directors and as a member of the campaign leadership committee for SFAF’s new Health & Wellness Center.

“For the past 30 years, SFAF has been at the forefront of the fight against HIV/AIDS,” he said. “SFAF has been a leader in raising awareness and advocating for progress in San Francisco, nationwide, and around the world. SFAF’s efforts have changed history over the course of the epidemic—helping stop the spread of HIV, improving access to care, and reducing health disparities.”

In honor of LSF hitting the milestone of $300 million in grantmaking, we’re checking in with James Loduca, Vice President of Philanthropy and Public Affairs, San Francisco AIDS Foundation (pictured right), to find out about the current impact of the epidemic and what the future might hold.

What are some of the greatest challenges of your work?

We see stigma every day: whether it’s a doctor who isn’t providing appropriate care, a community member posting harmful comments online, or legislative leaders implementing new laws that unintentionally marginalize people living or at risk for with HIV. Stigma comes from everywhere, and it’s really hard to define. But ending it starts with each of us.

Is there a misperception about HIV/AIDS in the United States versus abroad?

Yes, we still have 50,000 new HIV diagnoses annually in the US, and that number has not really decreased in over a decade. But the availability of highly-effective therapy, and insurance plans that lower (not eliminate) cost barriers, have brought HIV in most places in the US to a level of chronic disease, and that has changed perceptions about incidence rates. Other nations, especially those in the developing world, have continued to see increases instead of the flattening we have seen. But let’s remember: there are many people living within the borders of our small 7-mile-by-7-mile city that can’t afford food and shelter, let alone access to HIV treatment. And if you can’t access and afford treatment, your health outcomes are just as bad as someone living in areas around the world where getting antiretroviral drugs regularly isn’t really an option.

Why are marginalized populations more at risk for HIV/AIDS infection? How do other systemic problems such as racism, poverty and homelessness contribute to this issue?

Good question. Though HIV does not discriminate by income, race or ethnicity, geography, education, employment, housing status, sexual orientation, or gender identity, shocking disparities along these dimensions do exist. Nationally, we see that African-American men and women, especially those in the South, and young gay and bisexual men and transgender women, are disproportionately affected by HIV. Not surprisingly, places with high levels of homophobia and transphobia are seeing higher levels of HIV incidence. HIV/AIDS is a social justice issue, too. When people struggle to meet basic human needs like shelter, safety, and food and clean water, visiting a doctor or getting an HIV test is not high on the list of priorities. The systemic marginalization of individuals through racist acts and discrimination based on mental health status, drug use, or housing status pushes these individuals further and further from well-being and care. We have to start talking more about these issues and what we can all do to build a better, healthier, stronger community.

Why is it important to have long-standing partners like the Levi Strauss Foundation?

The great and true value is in the sustainability of quality services that such long-time partnerships provide is that they enable programmatic work that requires investment over multiple years for high impact, and they allow us to develop and pilot new interventions to address the changing landscape of HIV prevention and care. As an early and loyal partner in our efforts to increase HIV status awareness and reduce new infections, LSF has made an immeasurable contribution to HIV prevention and policy efforts in San Francisco and throughout the U.S.