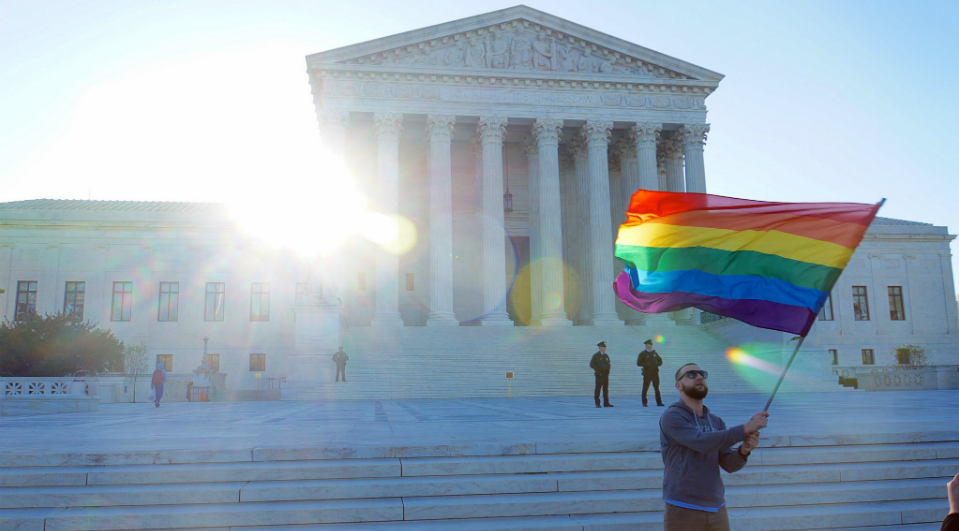 Kevin Cathcart: A Modern Day Pioneer Pressing On For Equality

The rainbow-filled celebrations supporting the recent U.S. Supreme Court marriage equality decision have been nothing short of awe-inspiring — from record-setting attendance at Pride events to rainbow-tinted Facebook avatars and celebratory #LoveWins tweets.

For the LGBT community and its allies, the victory is the culmination of decades spent fighting for marriage equality. And while momentous and historic, the decision isn’t the end of the road for equal rights.

Lambda Legal knows this firsthand — the organization, in fact, helped launch the modern marriage movement more than 20 years ago with the Baehr v. Miike case in Hawaii. Founded in 1973, Lambda Legal is the oldest and largest national nonprofit legal organization dedicated to achieving full recognition of the civil rights of lesbians, gay men, bisexuals, transgender people and those with HIV. The organization focuses on “impact litigation,” together with education and policy advocacy. As such, their staff carefully selects each case and campaign to marshal their limited resources toward matters that will have the broadest impact for the largest cross-section of the communities they serve.

Levi Strauss & Co. is honored to support Lambda Legal’s work focusing on impact litigation and the most vulnerable populations who are too often left out of the national conversation.

In the years since the Baehr v. Miike case, Lambda Legal’s National Marriage Project has taken on marriage equality battles across the country, including working with partners to win marriage for same-sex couples in California in 2008, before that right was temporarily taken away by Proposition 8. Prior to the Supreme Court’s ruling, Lambda Legal also won the right to marry for same-sex couples in Iowa, New Jersey, Illinois, Nevada, Arizona, Virginia, West Virginia, South Carolina and Indiana, and had marriage litigation pending in Puerto Rico, Georgia, Louisiana and North Dakota.

Lambda Legal is now preparing for what comes next. We had the opportunity to ask Kevin Cathcart, the organization’s executive director since 1992, (pictured right with one of the Ohio plaintiff families from the SCOTUS cases and Susan Sommer, Lambda Legal’s director of constitutional litigation and senior counsel and ) to discuss the significance of the marriage equality decision and what happens now.

Is that fight for marriage equality over now with the Supreme Court ruling?

While this poetic decision has made marriage equality the law of our land, we know and expect that there will be resistance in many places. It is possible that officials in some places may not start allowing couples to marry until the federal courts issue orders directly prohibiting them from enforcing their state or territory’s marriage ban.  It is also very possible that same-sex couples who marry will experience discrimination in employment or that businesses and other entities will refuse to recognize their marriages. We are prepared to continue the fight for equality and encourage any same-sex couple who encounters such difficulties to contact us.

Why has Lambda Legal’s marriage equality work been important?

During the past couple of months, we have had an outpouring of supporters join our #IDO campaign and #JusticeCantWait campaign, sharing their own personal views on why marriage equality is so important. Same-sex couples who choose to marry, and their children, are entitled to all the same protections, rights and responsibilities long available to different-sex couples and their families.

As we stated in our brief submitted to the U.S. Supreme Court, our clients got “married seeking a cherished status that protects families throughout life, from cradle to grave,” and the denial of recognition of these marriages by discriminatory state laws treated these loving couples as legal strangers to one another and, in many cases, to their children. These cruel laws told these couples and their families that they were, inherently, “less than.” So another important part of this victory was having the U.S. Supreme Court rule that the U.S. Constitution protects our right to marry the person we love in a decision that speaks so eloquently about our human dignity.

What’s next after the Supreme Court decision?

This victory at the Supreme Court for same-sex couples and families is transformative, to be sure. But even with an historic victory, it is not the end — even for our marriage work! A movement to secure civil rights is never finished by a Supreme Court ruling, no matter how important that ruling may be. As we have seen after past court victories, opponents determined to discriminate do not simply give up. One of the most popular tools our opponents have used to push back against our victories for equality are so-called Religious Freedom Restoration Acts (“RFRAs”), like we saw in Indiana this year, designed to allow commercial businesses, among others, to discriminate against LGBT individuals in the name of religion.

And there are many more protections to be won: more than half of states lack explicit state-level anti-discrimination laws to protect LGBT workers; LGBT veterans and their spouses are being denied the benefits provided to all other service members; LGBT youth are overrepresented and disproportionately harmed in the foster care and juvenile justice systems; workers living with HIV are still being unfairly treated based on the unfounded fears of their employers; transgender prisoners are at extreme risk of violence and mistreatment from both fellow inmates as well as prison officials.

“What’s next” is really a continuation of the vital work we are already doing – work that is not finished even with this historic Supreme Court decision. We never expect that our opponents will give up their fight to continue oppressing our constituents, and so we, too, will never give up fighting for true, lived equality.

Why are grants like the one from LS&Co. important to Lambda Legal?

As a legal advocacy non-profit fighting for the civil rights of minorities, our programmatic work depends entirely on private funding and grants. Because we often find ourselves adverse to governmental entities and officials in representing the interests of our clients and constituents, we cannot and do not rely on any government funding.

We advocate on behalf of the most vulnerable in our community whose health and well-being are often at risk in governmental systems and institutions. While the broader fight for institutional change and vitally needed protections continue, our everyday work that is funded by Levi Strauss & Co. not only demonstrates the commitment of the company in supporting a just and equal society, but also can make the difference between life and death, or torture and humane treatment, for our clients.

If you could ask everyone in the country to do one thing to support the fight for equality, what would it be?

Be an ambassador for equality. Lambda Legal has the most brilliant and dedicated civil rights attorneys and staff handling the cases that are most likely to get us to legal victories. But we know there is an enormous difference between legal equality, and lived equality. The courts can, and sometimes do, provide us with legal equality. But for people living their lives every day in our society – not in a court – we need ambassadors, allies and supporters to make lived equality a reality for all. Find out more about how to get involved in the campaign for equality at http://www.lambdalegal.org/get-involved.

This story is part of an ongoing series designed to feature people who are changing the world. Our Modern Day Pioneers are impacting everything from culture to social issues to the environment, and they’re challenging the status quo in a unique way. We hope these stories will inspire and empower you to live your life to its fullest in Levi’s®.

Want more stories like this? Sign up for our weekly Unzipped email or view more stories from our Modern Day Pioneers series.