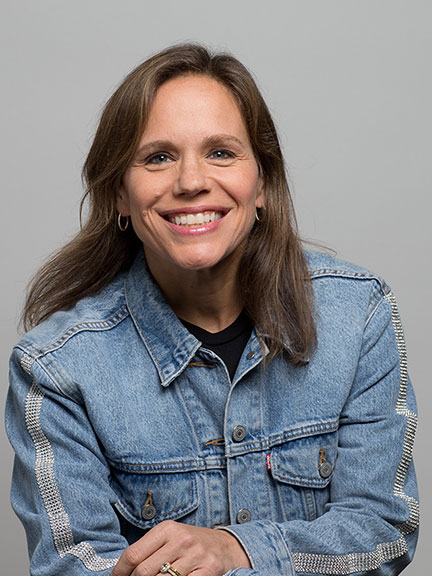 Jen Sey has been with Levi Strauss & Co. for more than 19 years, holding a variety of leadership positions within the Marketing, Strategy and Ecommerce teams. In 2013, Jen became the global chief marketing officer for the Levi’s® brand and in 2018 was appointed senior vice president and chief marketing officer, overseeing marketing for the company’s portfolio of brands. She is also a member of the company’s global leadership team, which guides the strategic direction for LS&Co.

In 2013, Jen returned to the Levi’s® brand as global chief marketing officer and quickly launched the Live in Levi’s® campaign, notable for reconnecting the brand with the optimistic spirit that fans around the world have loved about Levi’s® for decades.

Jen has received numerous awards, including the distinction of being named one of AdAge’s "Top 40 Marketers Under 40" in 2006, one of Brand Innovators' "Top 50 Women in Marketing" in 2015, Billboard Magazine’s "Top 25 Most Powerful People in Music and Fashion," receiver of the 2018 CMO Social Responsibility Award and most recently featured on Forbes CMO Next 2018: 50 Chief Marketers Who Are Redefining the CMO Role. In 2018, under Sey’s direction, the Levi’s® brand was awarded a Silver Cannes Lions award for the “Circles” advertising campaign, the most ambitious chapter from the Live in Levi’s® effort.

As a child, Jen led an intense life of dedication, challenge and competition. She won the U.S. National Gymnastics Championship title in 1986, less than one year after having suffered a devastating injury at the 1985 World Championships. As a result, the U.S. Olympic Committee named her Gymnastics’ Athlete of the Year. Jennifer retired after eight years on the national team and went on to study at Stanford University. In 2008, Sey released a memoir, “Chalked Up,” a New York Times E-Book Best Seller detailing her triumphs and struggles within the world of competitive gymnastics. She has published an op-ed in the New York Times and her writing has been featured in a variety of outlets as a leading voice in athlete advocacy, seeking to drive cultural and legal changes towards safety and athlete empowerment.

Jen is on the board of directors for the Red Tab Foundation, an organization within LS&Co. committed to the mission of employees helping employees and retirees in times of need.

Jen lives in San Francisco, California with her husband, Daniel, and her four children, Virgil, Wyatt, Oscar and Ruth.